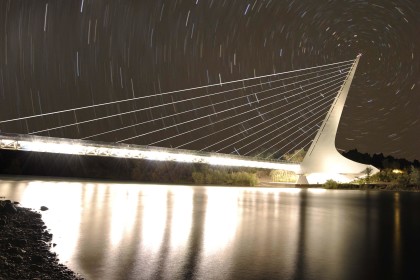 Stars above the Sundial Bridge. Photo by Aaron Patterson.

All Friday evening as I worked at my computer I had the nagging urge to go for a night walk to see the full moon.

Let’s see. Where does a single woman feel most safe to walk alone at night in Redding? For me, that’s the Sundial Bridge. The magnetic pull to the bridge was so great that I found myself wondering if I would meet someone interesting there. I changed clothes, put on some lipstick and exchanged my big “office” purse for my little “walking” purse that just holds keys and my wallet with some business cards.

It was after 9 p.m. when I left for my blue-moon walk. As I entered the Convention Center parking lot a small beat-up car sped out, driving like a bat out of hell. Full moon, here we come, I thought. (Let me just stop and say that no, I couldn’t tell you what the car looked like. I’d make a lousy witness because all I remember is the car was dirty and small and boxy. This explanation will make sense in a second.) 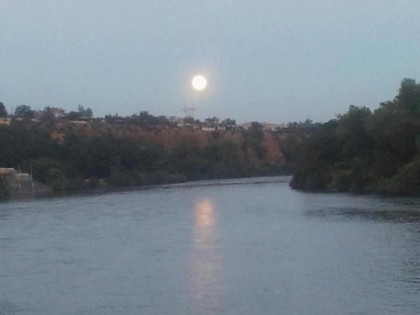 Moon’s reflection in the Sacramento River photographed from the Sundial Bridge deck. Photo by Karen Ball

I parked my car and had only walked a short distance when I spotted a clot of Redding Police vehicles crammed at the entrance to the Sundial Bridge near Turtle Bay Museum.

No pen. No notebook. Damn. I felt naked and ill-equipped. I walked toward the bridge, and noticed a middle-aged woman with short hair leaning over near an RPD squad car bumper. She had a small dog on a leash. No police officers were in sight, but at least one cruiser’s engine was still running.

The short-haired woman was telling people to get back, that a “crazy man” was on the loose, that he had a gun and a knife and he’d already assaulted a number of people before his escape. The woman spent a few minutes trying to talk a pair of women from Alberta, Canada, out of walking the bridge, and as the woman talked, the Canadians kept craning their necks and inching nearer to the bridge.

“Uh, isn’t there a river that goes under the bridge?” asked one woman.

The short-haired woman said yes, but come back tomorrow to see it, and the moon for that matter, but not tonight, because there was that crazy man somewhere on the grounds, and he hadn’t been found yet. It was too dangerous to go on the bridge now, she said. pointing out that the police nor the security guard had barricaded the bridge from visitors, which was reckless, in her opinion.

I bumped into Carla Jackson (one of anewscafe.com’s talented writers, btw), with her husband Mark Olney. Just like me, and so many others there, they’d arrived at the Sundial Bridge for a stroll and to see the full moon. They told how, as they approached the bridge, they heard someone yelling one word – “help” – over and over, almost like a cadance. This was before the police arrived, but they’d also noticed a clump of people standing and gesturing in a way that made Carla and Mark feel as if something was wrong. (The woman shouting about a dangerous man who’d not been “comprehended” – that was another tip-off.)

Carla and Mark said they heard stories from various people around the bridge that a man and a woman were each punched in the face, and that the hitter had then threatened to stab a girl and throw her over the bridge. My friends hadn’t seen the man, but they pointed me toward the couple who’d been attacked.

I briefly borrowed the Turtle Bay security officer’s pen to scratch tiny notes in the dark on a business card. Kim Conant, 56, and Tim Murray, 58, both of Redding, had come to the Sundial Bridge so Conant could take some photos of the moon near the bridge. Conant said Murray was talking to a man with darkish skin coloring, about 6 feet tall, weighing about 250 pounds or more, shortish hair, wearing an orange-red baseball cap. He carried a large backpack. Both Murray and Conant were under the impression the man was a transient.

Conant said that completely out of nowhere, totally unprovoked, the man with the baseball cap punched Murray in the face, knocking him to the ground. Murray picked up the man’s backpack and started swinging it to keep the man from hitting him again.  The man punched Conant in the face, too, just as she’d stepped back to dial 911.

‘The bridge was packed,” Murray said. “I started yelling for help,”  adding that people started backing up, away from them, which was what he hoped would happen, so nobody else would get hurt.

The couple said that baseball hat guy started heading for the Arboretum side of the bridge, and along the way, he threatened a young woman who’d started talking on her cell phone.

After that the police arrived with a K-9 unit, and fanned out in search of the man.

The Turtle Bay security guard said he’d never seen anything like this happen before on his shift, with the exception of the summer night that a young pregnant woman was attacked.

Meanwhile, the short-haired woman with the leashed dog stood at the entrance and alternated her speech between turning people away and complaining about the police and Turtle Bay’s security guard. When officers returned to their cars, and the woman yelled and asked if they’d found the man, one of the officers replied no, they hadn’t. This prompted an escalated tirade from the short-haired woman, who promised to call the officers’ boss –  “Ron”  – the next day to complain, to which one of the officers said the woman could go ahead and do that.  (By the way, the police chief’s first name is Robert.)

Back at the bridge, Conant, who happens to be the mother of a son and daughter who were Marines, said this was the first time in her life that she’d been assaulted, that if she’d had any idea of the man’s intentions to punch her, she would have first kicked him in the balls.  Conant, whose face looked like it was starting to swell, said she felt pretty shaken.

Murray had the most apparent injuries, with a bloody lip, and a banged-up elbow and leg.  Murray said he might have hit his head on the bridge railing, too. Murray said he also lost a $500 pair of Titanium-and-wire prescription sunglasses in the assault, glasses he needs for his electrical contracting business, Power by Tim. At one point I worried if maybe Murray had suffered a severe head injury, because he mentioned something about “Messiah on a Fridgidaire” and that his name was Reverend Cecil Hodges. When I asked if he was related to another Hodges I know, Murray said no, he was talking about his part in an upcoming Riverfront Playhouse performance, “Messiah on a Fridgidaire”.

Speaking of missing segues, from a clump of trees along a paved road in the shadows came a group of touring segways that motored by. The helmeted riders had impassive expressions as they listened via headsets to their tour guide’s message. The segwayists seemed oblivious to the violent events that had transpired at Turtle Bay that night, or the fact that somewhere in the dark was a man wanted by police for attacking a couple who’d come to the bridge to do nothing more than enjoy the evening air and photograph the moon.

Eventually, a police officer asked Murray if he needed a ride to the hospital, an offer Murray declined. The police cars left, with the short-haired woman yelling as they drove off.

At first, Conant and Murray said they would resume their evening as planned, by going to one of their favorite restaurants, Tortuga Bay Grill, but then they realized it might be too late, that the restaurant was probably closed by then. The couple left.

People streamed onto and off of the bridge: a father and daughter, a bearded man on a bike, an elderly man who pushed a woman in a wheelchair, two men who spoke to each other with sign language, some guys with dogs, and many couples, all out for an evening stroll. The security guard leaned against the planter and surveyed the scene.

I accepted Carla and Mark’s offer to walk across the bridge with them, since that’s why I’d come in the first place.

We passed droplets of bright red blood that glistened on the glass panels under the light of the moon – a blue moon, peering from behind valley oaks, taking it all in. 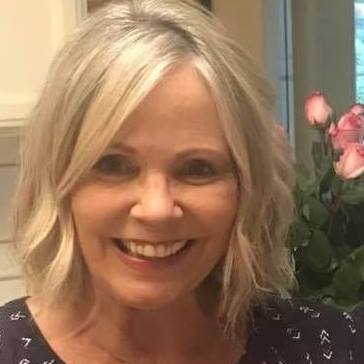 Comment Policy: We welcome your comments, with some caveats: Please keep your comments positive and civilized. If your comment is critical, please make it constructive. If your comment is rude, we will delete it. If you are constantly negative or a general pest, troll, or hater, we will ban you from the site forever. The definition of terms is left solely up to us. Comments are disabled on articles older than 90 days. Thank you. Carry on.
43 Comments
Oldest
Newest Most Voted
Inline Feedbacks
View all comments
Post Views: 760