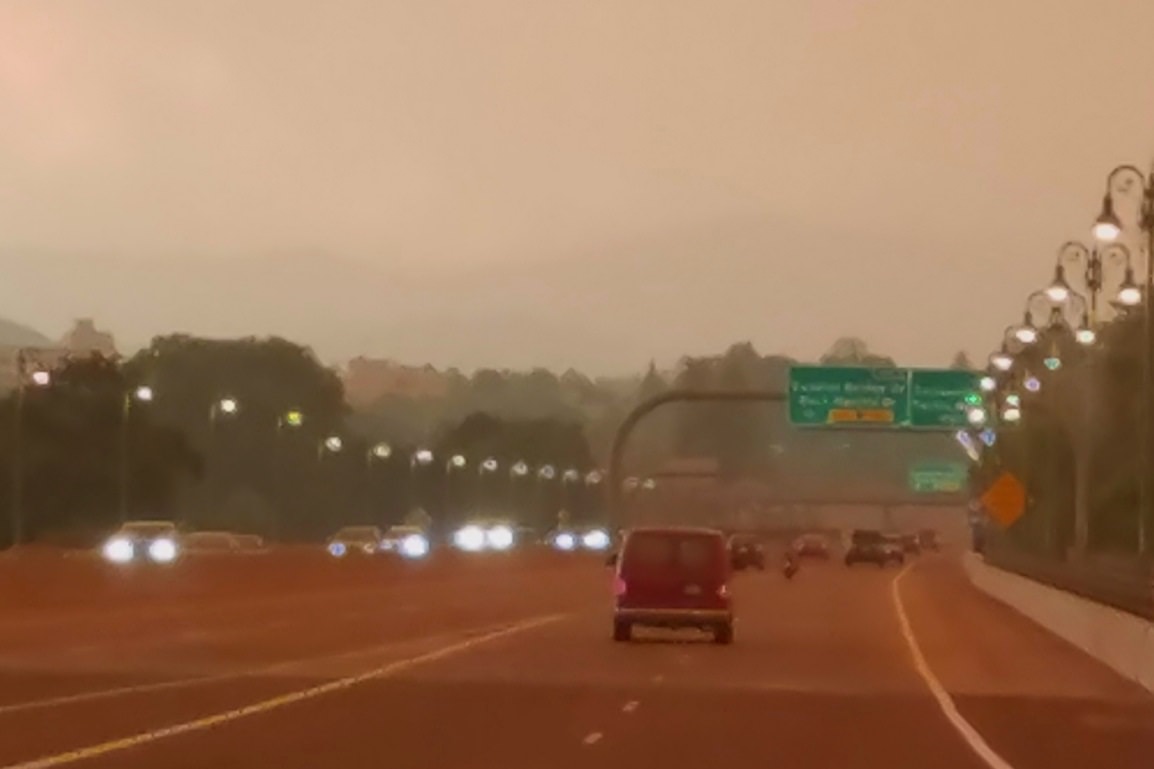 Thursday afternoon on Highway 44 in Redding. Photo by Doni Chamberlain.

The Carr Fire is a violent monster. It shows no mercy. It goes where it wants and takes what it wishes. By day it crouches like a coward behind its ugly smokescreen where we can’t see its destructive flames. Our eyes and lungs feel the sting. We’re blinded by smoke. Where is it? Where is it?

The Carr Fire takes that wicked opportunity to cook up a thick, putrid-smoke soup, obliterating mountains and sky, concealing fire targets from fire-fighting aircraft high above, giving the beast a daytime advantage to have its way with our north state until nightfall. 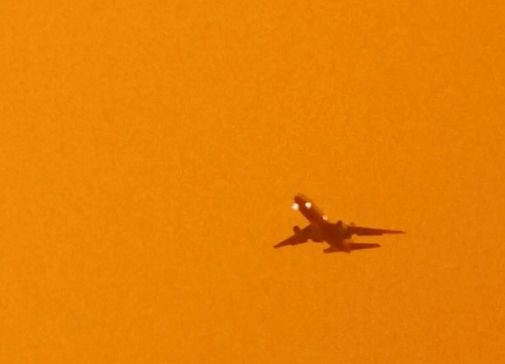 An air tanker navigates through the thick smoke. Photo by Doni Chamberlain. Under an eerie Halloween glow, people flock to the safety of high, distant places where we gawk west at an unbelievable sky. By night the wind energizes this monster, infusing it with fresh oxygen that emboldens it to leap up  and reach for the stratosphere; orange and black and furious where it mocks us with massive, waving red fingers. It’s displaced nearly 40,000 of us from our homes. It’s claimed 80,000 acres and climbing, with 5 percent containment, which is basically no containment. It’s torched and destroyed more than 500 confirmed structures, and we dread the official count, because we know the numbers will take our breath away.

Here in Redding, I have been evacuated, but I’m far from alone. In fact, it’s no exaggeration when I say that I personally know more Redding people who’ve been evacuated than those who have not.

Out of respect for their privacy, I won’t name them here, but I have lost count of how many friends and acquaintances who’ve lost their homes to the Carr Fire. My heart breaks for them. Some of these newly homeless people include a few of aNewsCafe.com’s own.

And one of our ANC contributors was injured when he fell from a friend’s deck in the dark as he rushed to help her evacuate Thursday.

Hallmark doesn’t make a card for this situation. Words fail.

In the grocery store, I recognize the dazed, zombie-stares of fellow evacuees, and those who’ve lost homes. I see parking lots with vehicles, boats and flat-bed trailers crammed with bulging laundry baskets and boxes that hold photo albums, stuffed animals and clothes. These are not the vehicles of travelers. These are the vehicles of the evacuated, the newly homeless, and the soon-to-be homeless.

The Carr Fire is personal. My daughter-in-law’s brother and fiance’s home burned to the ground. Their wedding was scheduled for Aug. 5. My twin’s neighborhood is evacuated. Many of my friends have evacuated, and some remain unsure of the status of their homes.

My mind is at ease knowing that my daughter, and daughter-in-law, and grandchildren are out of harm’s way, away from the smoke, far from Shasta County. In other neighborhoods, such as where my 80-year-old home is located, there have been reports of looting by despicable opportunistic human cockroaches who skitter in the dark with flashlights as they break into abandoned homes in search of valuables. Guess what, assholes? I already took with me my most-precious valuables: Photo albums, my kids’ clay projects, artwork created by my twin, daughter and sons, the toddler-sized pear sculpture hand-made by my sister, and that massive old portrait of my mother, who stares at me from the backseat as I drive through Redding’s smoky streets.

Everything else is just stuff.

Many Redding streets are blocked. Others have traffic lights that flash red. That’s the color of the week: Red. No green in sight.

Friday, private contractors hired by Southern Pacific Railroad scrambled to quickly cut back brush below the massive railroad trestle that towers high in the air, and crosses the Sacramento River. Can you imagine that trestle on fire. No. Hell no. Crews race to remove brush and fuel below the Southern Pacific Railroad near Benton Road off North Market Street in Redding. Photo by Doni Chamberlain.

I’m numb. I never believed that my urban neighborhood, surrounded by asphalt streets, concrete sidewalks and even rock walls, would be in real danger. I confess that I ignored the frantic warnings from my sister all day Thursday, and her increasingly urgent pleas to leave. I wasn’t worried. I told her I hadn’t been officially evacuated. I was so confident that I would be staying put that I even invited friends who’d been evacuated from Sunset Terrace to come stay with me, never imaging that by nightfall, I’d be the one needing a place to go. (I’m at my daughter’s in Enterprise.)

I now remind myself of two words: Santa Rosa.

Thursday, shortly before 10 p.m., the California National Guard rolled through my old neighborhood, bellowing through bullhorns orders to leave immediately.

There’s no denying that the Carr Fire has taken so much from us. There’s no doubt it’s shaken us to our core and it’s frightened us into submission.

Even so, we have so much to be grateful for. We have law enforcement, emergency workers, firefighters and the National Guard, whose mission is to risk their lives to protect us. Firefighters sleep on the ground in the Mary Lake area in west Redding after establishing a fire break. Photo by Richard Tuggle.

Most of all, we have each other.

Of course, you have aNewsCafe.com, but there are other stellar local media, such as KQMS radio and KRCR TV; professionals who toil around the clock to continue bringing you accurate news and information.

Good stories abound of selfless people and generous businesses demonstrating supreme acts of kindness, of going above and beyond to help not just friends and family, but total strangers.

I’m grateful for every one of them, just as I’m grateful to the young man in a huge red truck who stopped in front of my house Thursday night and asked if I needed help removing things from my house. I said no, thank you. Now I wish I’d gotten his name.

Yes, much is lost, but not all is lost. We haven’t lost hope. We haven’t lost our love for this area we call home. We’re north state people. We know how to rise to a challenge. In fact, we’re at our very best when we’re tested. We will not fail.

Yes, the Carr Fire is a formidable foe. But we’re stronger. We’ll get through this, and when we do, we’ll end up stronger than ever.