Jason Schroeder unlocks the door of his south Redding guitar workshop and steps into the unassuming, sunlit space. He’s just come from a meeting with businessmen Ed Rullman and Mike Dahl – wearing his “community advocacy hat” – but switches easily to the labor that pays the bills, gives him schedule flexibility, and, most notably, that he loves.

Schroeder, 42, has made recent local headlines for his and his wife Elizabeth’s Stand Up Redding efforts to combat neighborhood crime. On Nov. 13, Schroeder was one of the speakers at the Safe City Project town-hall meeting at the Redding Civic Center.

The Schroeders, who are raising four children, also work together at Jason Z. Schroeder Fine Guitars. No surprise that the entrepreneurial energy and organizational determination that has made a success of that business has also translated to the grassroots campaign endorsed by city leaders and others.

Though Schroeder will tell you that “accidentally, we did a lot of cool things—some of it was intentional, some of it was lucky,” his branding in the niche market of high-end guitars has taken patience, persistence and hard work. 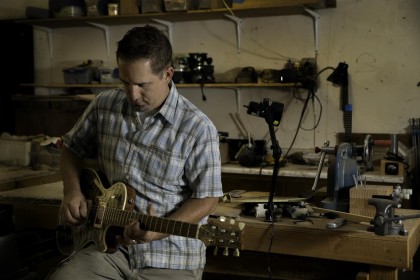 Jason Schroeder spends many hours building guitars in his studio.

And that has paid off. A yearslong connection with a guitar repairman in Georgia, who was using Schroeder parts on guitars for the Zac Brown Band, led to a recent meeting with the three-time Grammy-winning country/folk band. The Schroeders hung out in Zac’s trailer for about an hour before a concert and showed him several guitars.

“Zac really liked the GI guitar that we built to honor the ‘Greatest Generation,’” Schroeder said. It was a dream come true when Zac subsequently played the guitar onstage.

The GI guitar hangs on a wall of guitars in Schroeder’s studio that showcases his personal collection and the history of the company. It includes his first instrument from high school, one from college, a special tour guitar sent all over the world, as well as a guitar played by Fleetwood Mac and others played during the Grammy and Tony awards. 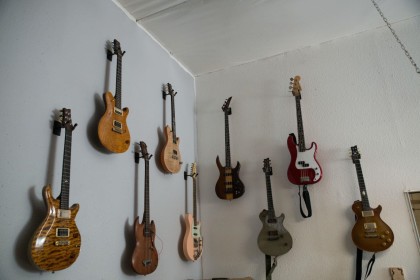 Schroeder’s personal guitar collection hangs on the wall in his studio.

Schroeder has also built guitars for Blondie and Bush, among other celebrity musicians.

Fleetwood Mac guitarist Neale Heywood with a custom Schroeder “Monk” Chopper, which Heywood has described as the “Alpha in the pack” of his guitars.

Featured in a German guitar magazine in a two-page spread (pictured below), Schroeder’s GI guitar has tent canvas around the body. He uses a rifle bolt from a Remington 550 as the three-way switch for the pickups, vintage military radio knobs, and makes the neck from a figured walnut gunstock blank. A khaki cargo strap from an old pickup truck adds the perfect touch. 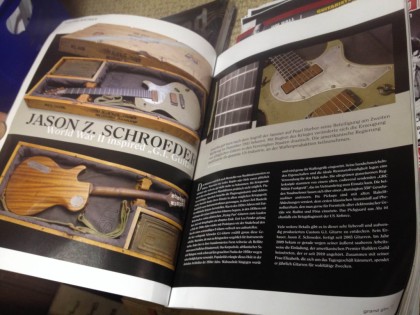 Those kinds of creative details – which he customizes based on customer likes – are just one aspect of what Schroeder loves about building a guitar from scratch. “I enjoy all of it in different ways,” he said. “I love designing and drawing a new shape. I like taking a flat piece and turning it into an ergonomic thing of beauty.”

That passion is evident to those in the field. “Jason’s one of these guys – his attention to detail is just insane,” said Amps & Axes podcast host Mick Marcellino, during a Jan. 15 interview with Schroeder. “You’re looking for a flaw … but it’s absolutely spot-on, every single one of them.”

Schroeder has only been building guitars full time since 2007. Trained as a geologist, he moved to Redding in 1998 to work with SHN Consulting Engineers & Geologists.

But his guitar-making “hobby” had taken root years earlier. He made his first guitar in high school. He had played in bands and a jazz ensemble since junior high, and, “I really wanted a new bass, but we couldn’t afford to buy one,” he said. “So my dad said, ‘Let’s build one.’ So I spent a few months in the garage making sawdust until I had something that resembled a bass guitar,” he said.

Incidentally, Schroeder still plays that bass—he played it at the Redding Convention Center last year when a band he performed with opened for Chris Young.

For Schroeder’s graduation from college—where he studied geology and minored in art—his dad, an engineer, bought him power tools. In graduate school each night, he’d work with the tools. And he’d find himself drawing guitar designs in his class notes, brainstorming what he could make better.

As his guitar-building grew, and he realized there was a market for it, he had to make a decision. So he quit his company job and “put his head down and worked.”

His science background and artistic sensibility are an ideal combination—he doesn’t just excel at making a beautiful guitar, he also manipulates the instrument to get the best possible sound and feel.

It’s this combination that has earned his work such distinctions as Premier Guitar’s Artisan Award, given to pieces “that embody elegance, beauty and craftsmanship.” As Premier notes, “We’d hang them on our wall if they didn’t sound so damn good.”

“I like to say I build ‘wow’ guitars,” Schroeder said. He doesn’t have an exact count, but estimates he’s made hundreds of guitars—spending between 40 and 100 hours on each. 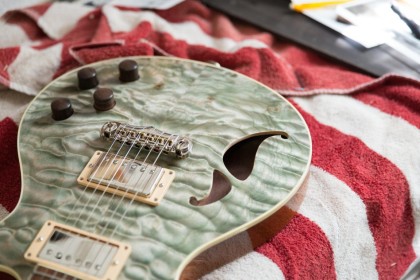 A recent purchase of a computer numeric-controlled (CNC) machine will help him build more guitars more precisely and do things not feasible by hand. The machine cuts wood into shapes that he has drawn on the computer.

But technology won’t ever replace the handcrafting that goes into his work, Schroeder said. “Everything that matters on a guitar is done with the builder’s hands, instinct and judgment,” he said.

Making a guitar from scratch starts with selecting wood—Schroeder has a room in his studio filled with pieces gathered over the years from trusted suppliers. He cuts out flat pieces to use for the base. “I start with rough lumber and, to steal a phrase from Wayne Henderson, I then remove anything that doesn’t look like a guitar,” he said. 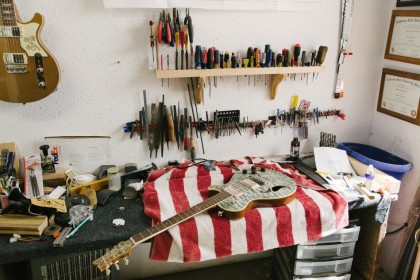 A custom-built guitar is getting finishing touches inside Schroeder’s studio.

Constructing the neck of the guitar is very technical work—“almost two-thirds of your time is spent on it,” he said—involving such tools as an antique horse rasp, scrapers, a handheld router and edge sander.

The biggest mistake of rookie builders, he said, is “cutting the neck too thick.” Schroeder does the round carve by hand using a heavy metal horse rasp he bought from a farmer at a flea market. The scraper was designed to file horses’ hooves.

Schroeder uses a fret-slotting jig to cut grooves in the fingerboard, then does special inlays (a guitar he’s making for a doctor has the Hippocratic symbol inlayed on the fingerboard, for example) before gluing it together and pressing the frets into it.

In addition to guitars, the Schroeders’ company also sells parts, including a bridge (which holds the strings in place) and studs (which hold the bridge to the guitar). Schroeder recently learned that Zac Brown’s guitar player will be using the Schroeder wraparound stoptail bridge as standard equipment on his signature Ibanez Artist Series guitar.

Schroeder cites 2009 as the year things exploded for the business. He and Elizabeth attended the National Association of Music Merchants (NAMM) show in Nashville—“we almost didn’t go,” he said—and they left with a catalog deal for their bridges and Premier Guitar magazine wanting to review his Radio Lane guitar, which went on to win the Premier Gear Award, then the Artisan Award.

Around that time, Schroeder sent a guitar to Lindsey Buckingham, guitarist for Fleetwood Mac. The band’s 2009-2010 “Unleashed” tour included two Schroeder guitars. The Schroeder name was out there, and they were hit with more orders than they could handle. 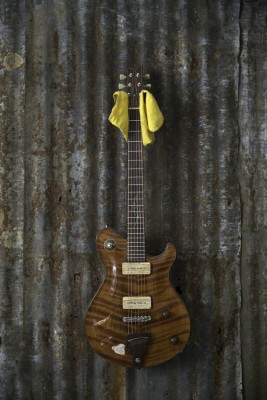 Schroeder Guitars was one of the initial builders invited into the Premier Builders Guild in late 2009—which, at the time, “was like I was being lumped in with my heroes,” Schroeder said. He remained with the Guild until 2012.

Schroder also sings, plays guitar and writes songs, most notably with the local band Clear Cut. He’s had the opportunity to speak to local high school classes and at an entrepreneurial summit focusing on international business—Schroeder Guitars can be found in Japan, Europe, Singapore, Italy, South Africa, and Australia, among other countries.

He and Elizabeth have also donated guitars for various causes, raising tens of thousands of dollars for cancer research in the process.

He laughs that people sometimes think he’s unemployed because he has so much flexibility to do community advocacy work. “Our business is simple by design,” he said. “It’s nice to have the freedom.”

Click here to read more about the Schroeders’ Stand Up Redding campaign.

Candace L. Brown has been a newspaper and magazine reporter and editor for 20 years. She lives in Redding and can be reached at candace.freelance@gmail.com.