Proud Enterprise High School alum Heidi Luerra will always call Redding home. But at 18 years old, she said goodbye to the “530” and headed south to Los Angeles to explore the world of fashion, a territory mostly uncharted in far Northern California. This industrious entrepreneur launched a clothing line for pre-teens a year later — a good experience, despite the struggling, breaking-even and crack-of-dawn schedule.

But she was on the right course. An idea was born from the toiling and tussling of Heidi and her growing group of friends –- painters, designers and musicians -– trying to make themselves seen and heard in LA’s artistic bazaar. They pooled their talents (mailing lists and marketing dollars, too) to create one big fashion and art show.

Three years later, Heidi ditched her clothing line and christened her new artistic collaboration “RAW: natural born artists,” an arts organization for artists, by artists. RAW — which is not an aconym, but an adjective — provides independent artists of all creative genres with the tools, resources and exposure to inspire and cultivate creativity.

So what does that mean? It means “artistic socialism,” according to Heidi. Sure, RAW has a spectacular website featuring a nationwide roster of artists, fashion designers, musicians, film makers, make-up artists and performers. That’s just the bling. It’s the collaboration, in the form of art showcases, based on Heidi’s pre-RAW formula, that makes RAW unique.

“RAW is a community above anything else,” says Luerra. “We work day-in and day-out for the satisfaction of seeing our artists collaborate, inspire and evolve.”

Heidi’s vision? A multi-city, interconnected arts marketplace. She’s doing it. I caught up with Heidi this month as she prepared to launch “RAWcross America,” featuring showcases in 17 cities (including a stop in Northern California) in February, and monthly group shows in each of those cities, through October. Here’s our conversation:

I love that you describe your events as a “circus of creativity.” Tell me more about the circus that is a RAW event.

Each RAW event consists of a film screening, fashion show, art gallery, musical performance and performance art. Each showcase is different. Sometimes we have body painters. We’ve had fire dancers. We’ve had mermaids. Anyone who is doing anything creative is welcome to submit their work for consideration. The idea is to take a snapshot of a community’s artistic culture in one night, in one venue, once a month. 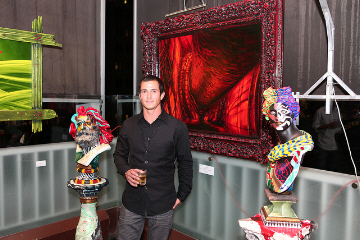 RAW is so many things: artist showcase, educational tool, marketing machine. Did RAW begin as all of these things?

RAW started out as just the showcases. They were free to attend and we were just testing the market. Two years ago, we threw the concept out and hoped people would enjoy it. We eventually charged admission so we could offer more: marketing, education and perks. We just finished a three-and-a-half week tour across the U.S. to promote our nationwide launch.

I also love that you showcase non-traditional artistic media, like burlesque, make-up and fashion. Ever get any flack?

Flack. Yes. Every day. But it comes with the territory. When you’re trying to do something fresh and outside of the box, you always get the nay-sayers, the non- believers and the “I don’t get it”s. Motivation! RAW is not trying to be a traditional venue, and I think that’s one of RAW’s biggest strengths. If you’re looking for a white walled art gallery, we’re not your cup of tea. We’re colorful, loud and believe that anything creative is worth showcasing.

RAW has 17 city directors who run the show. What do they do?

It takes a very special and specific person to be a city director. They have to have experience in event production and communications, and know good art when they see or hear it. They have to know their city, the nooks and crannies, the culture, the venues and the talent. The City Director chooses 15 to 20 artistic entities every month and nurtures those relationships. City directors produce the showcase, manage a small staff and make sure everyone is happy. They are ambassadors for RAW, it’s mission and the brand.

You’re showcasing near your old stomping grounds. Tell me more details about the Sacramento show.

RAW will launch in Sacramento on February 17 (today) and continue on the 2nd Thursday of every month until the season ends in October. The debut show will feature local talent in fashion, music, art, film, poetry and accessories. Our exclusive Sacramento venue is Harlow’s in Midtown.

How about a “State of Jefferson” RAW?

I’ve thought about bringing one to Redding, because I know the creative kids would love it. I’d have to have some strong interest from the community before I took that leap!

Adam Mankoski enjoys experiencing and writing about the people, places and things that embody the free spirit of the State of Jefferson. He and his partner own HawkMan Studios and are the creators of Redding’s 2nd Saturday ArtHop. Email your NorthState weekend events to adamm.anewscafe@gmail.com.

is a recent North State transplant who feels completely at home here. He enjoys experiencing and writing about the people, places and things that embody the free spirit of the State of Jefferson. He and his partner are the owners of HawkMan Studios and the creators of Redding’s 2nd Saturday Art Hop.