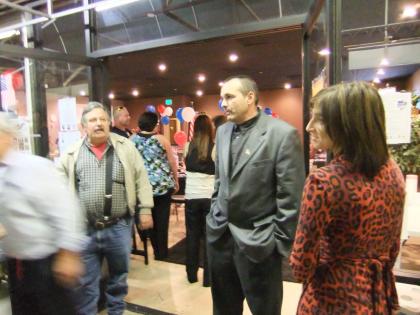 Patrick Jones (second from right) chats with visitors at the doorway of his election party Tuesday night at Tobacco and Brew in Redding.

In a Redding City Council election that centered around the retirement and health benefits of city workers, two council incumbents who have taken a hard line against unions were victorious Tuesday night.

Council members Rick Bosetti and Patrick Jones, who ran on a platform of being “fiscally conservative” while pushing for city employees to pay a greater percentage of their benefits and retirement to make up for budget shortfalls, both retained their seats. Bosetti led all 10 candidates with 10,771 votes (17.91 percent) with 54 of 54 precincts reporting. Jones had 9,031 votes (15.02 percent).

Francie Sullivan, one of a trio of candidates endorsed by Redding police and firefighter unions, won the third open seat with 8,949 votes (14.88 percent).

In an election night party at Tobacco and Brew in Redding, Jones said the vote went exactly as he expected.

“Rick and I stayed true to our message, and looking at how Measures A and B went, I think reinforces the positions we’ve taken,” Jones said. “This community is conservative and the vote represents that. Two of the three candidates that are winning are conservative, so in that regard, the voters are spot on. I always had faith in the voters.”

Measures A and B both passed by heavy margins.

Measure A, which asked voters to approve the idea of police and firefighters paying 9 percent of their salaries toward their pensions and other city workers paying 7 percent, passed with 13,940 votes in favor or 64.36 percent. The city has paid those contributions since the 1980s.

Measure B, which asked voters to approve the idea of requiring workers to serve at least five years before drawing health insurance coverage from the city as retirees, passed with 69.56 percent (15,117 votes).

Both measures were brought to a vote by Jones, Bosetti and council member Missy McArthur. The measures are non-binding, however, and have drawn criticism from council members Dick Dickerson, Mary Stegall and others as being a waste of thousands of dollars of taxpayer money.

Francie Sullivan, left, and Sandra Speer address an audience at an election party Tuesday night at the UPEC office on Park Marina Drive.

The city council election saw 10 candidates run for the three spots to join Dickerson and McArthur on the five-member board. All 10 candidates agreed that some concessions and cost-saving cuts would be required of city workers, however, Sullivan, Sandra Speer and Ken Murray argued that the tactics of Jones, Bosetti and McArthur have been deeply disrespectful to city employees.

“The majority of this city council has been very demeaning to the employees at the city,” Sullivan said on Tuesday night from an election party at the United Public Employees of California office on Park Marina Drive.

“We’re missing out on a chance to use the wisdom of 800 people who work for the city, and get their input about how to cut costs. I haven’t found any city employee who isn’t willing to make changes in their retirement benefits. But there have been no offers to negotiate in good faith.”

Phone calls to Bosetti regarding the vote were not returned as of early Wednesday morning.

Speer, a former human resources director for the city of Redding, finished sixth with 6,898 votes. She said she’s never seen a more aggressively antagonistic position against employees than what she’s witnessed from the majority of the council in regard to the benefits/pensions issue.

“Even considering my work in private industry, I’ve never seen leadership with such disrespect (for city employees) as I have with this council,” Speer said. “They just don’t care.”

Murray said Tuesday night that he doesn’t believe Jones, Bosetti and McArthur have the skill or “breadth of knowledge” to negotiate with labor unions.

“The truth is, they haven’t negotiated anything yet,” Murray said. “Eight city union contracts come up in the next four years and their plan is to have this turmoil come up over and over. They’re not working with the union leaders. Patrick Jones’ idea of negotiating is ‘Do what I say.'”

Restructuring of the benefit contributions is essential for solvency of the city, Jones said. He added that city workers are valued by himself and the rest of the council.

“To all the good city workers we have, and we have excellent city workers, we highly appreciate them,” Jones said. “But it’s time to make some changes in benefits. Union leadership needs to start working with the council for the benefit of the community. At the end of the day, we’ll still have very well-paid employees with excellent benefits.”

In contemplating her new position on the council, Sullivan, a former county supervisor, knows that she’ll likely be in the minority on several issues, but hopes that the new council can find some common ground.

“I hope we can have a more tempered discussion with our city employees,” she said. “I really want to work with the present city council to come to a reasonable resolution.”

In the Anderson City Council race for two seats, Keith Webster and John Day, with 909 and 847 votes respectively, appear to have beat out Debe Hopkins, who took 825 votes.

A News Cafe, founded in Shasta County by Redding, CA journalist Doni Greenberg, is the place for people craving local Northern California news, commentary, food, arts and entertainment. Views and opinions expressed here are not necessarily those of anewscafe.com

Comment Policy: We welcome your comments, with some caveats: Please keep your comments positive and civilized. If your comment is critical, please make it constructive. If your comment is rude, we will delete it. If you are constantly negative or a general pest, troll, or hater, we will ban you from the site forever. The definition of terms is left solely up to us. Comments are disabled on articles older than 90 days. Thank you. Carry on.
9 Comments
Oldest
Newest Most Voted
Inline Feedbacks
View all comments
Post Views: 245