Sean Feucht for Congress and the New Religion of Politics

Editor’s Note: Sean Feught, and Kris Vallotton of Redding’s Bethel Church, were featured at the “Rally for America” on The National Mall in Washington, D.C., Wed., Feb. 5. 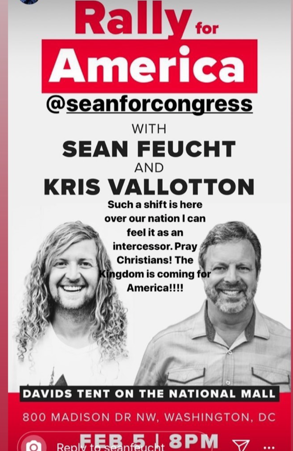 “Our mandate as believers is not passive or apathetic.
It’s time to take responsibility for our cities, states and nation.
We have to do more than just pray.
We must engage to bring change.”
-Sean Feucht, California candidate for Congress 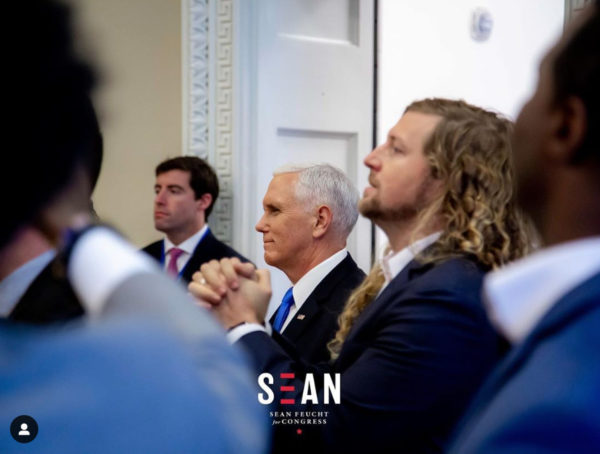 Sean Feucht is running for Congress in California’s Third Congressional District, an area that includes Colusa, Sutter and Yuba counties. Politics is a new realm for Sean, who is most well known for his Christian music albums.

Here in the North State, his political aspirations matter because he’s a member of Bethel Music and closely affiliated with Bethel Church, a local Redding megachurch with 10,000 attendees and $60 million in annual income.

So what’s a Christian musician with a degree in business administration from Oral Roberts University, 20 worship albums, five books, and three religious nonprofits doing jumping into the political realm?

Sean tells us. He’s fearing God more than men and becoming a force for change. He’s seen the moral decay of our nation, and especially the state of California, and he’s determined to be part of the solution. 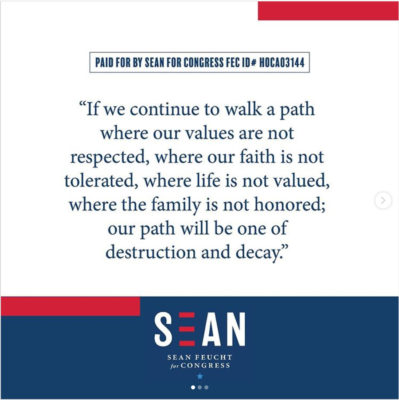 Image taken from the Sean Feucht for Congress instagram page.

Specifically, Sean’s determined to end abortion, lower taxes, bring back school prayer, reduce or eliminate sex education in public schools, and most of all, bring back “common sense.” Or at least that’s what I’ve gathered from my informal survey of his tweets and Instagram posts.

I relied on social media to find out what he stands for, because, unbelievably, a mere month before the primary, this candidate for Congress does not have a single policy stance listed on his campaign website.

He’s running for Congress under the slogan, “ The people who got us into this mess can’t get us out!” referring, it seems, to California’s democratic leadership and to Sean’s disdain for their response to “the crisis” in our state. This crisis, per Sean, includes “exploding homelessness, high cost of housing, high cost of gas, wildfires and failing infrastructure.” All arguably, real problems requiring complex solutions.

But Sean offers no solutions for how he thinks he’ll get us out of the mess he says we’re in.

Not on his campaign site, not on his social media pages, and not in response to repeated requests from individuals responding to his posts online. 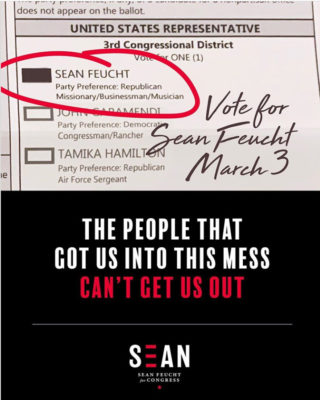 Image taken from the Sean Feucht for Congress Instagram page

Instead, his campaign seems focused on what some have referred to as “virtue signaling”, opinionated commentary about his support for Trump, the dangerous sex education our children are being exposed to in California’s public schools, abortion, and the “unbelievably corrupt” political system in California. In the five months I’ve been following him on social media (with notifications turned on) I have not yet seen Sean offer a strategy or policy approach to these problems.

Instead he has offered opinions, which he refers to repeatedly as “common sense”, a euphemism he appears to use for “governing according to what I see as God’s way.”

In Islamic theocracies they call this form of governance Sharia law.

With the religious superpower, Bethel Church, behind him, Sean Feucht has the chance at some big political funding. But donations to his campaign through the end of 2019 capped out at just under $187,000. Recognizable donors include Bethel’s senior leader Bill Johnson, Bethel’s second-in-command Kris Valloton, Bethel elder and local Dignity physician Andre Van Mol, and Bethel’s “Love after Marriage” ministry founder Barry Byrne.

Sean also received campaign contributions from Lou Engle, famous for his anti-abortion and anti-gay activism both in America and Uganda and for his role as founder of The Call, a religious/political rally that has been held more than 20 times over the last 12 years in various locations. Bunni Pounds and Cindy Jacobs are also both donors to Sean. And he’s been endorsed by Mike Huckabee, former Governor of Arkansas, who gave $5000 to Sean through his HUCK PAC.

In fact, donations to Sean’s campaign are not mostly from the people in his district, or even his state. Combined, Sean has more donors from the states of Oklahoma and Texas than he does from California. This is likely because Sean’s run for Congress is part of something bigger than representation of the Third Congressional District or indeed, even of California.

He’s part of a new movement where policies matter less than your affiliation with so-called Biblical morals and values. A movement where a musician, who runs a non-profit that consists of “furnaces” around the world (spaces dedicated to nonstop 24-7 worship and prayer), is considered a top-notch candidate for Congress.

It’s an organized new religion of politics. And it’s represented by behind-the-scenes political operative David Lane, who wrote an article for Charisma News, saluting Sean Feucht for running for Congress. 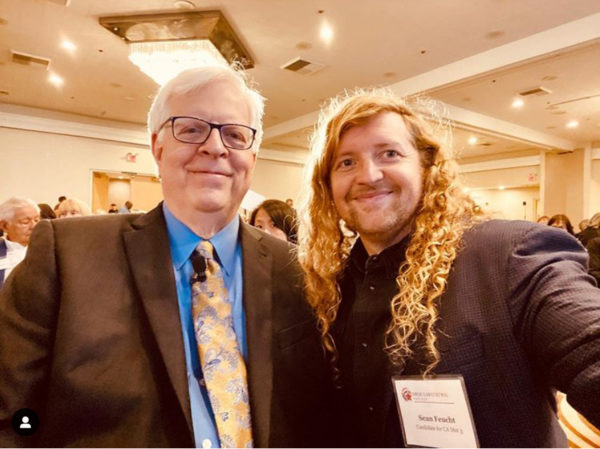 Picture taken from the Sean Feucht for Congress Instagram page.

“God has a remedy for every crisis. I believe a spiritual awakening is our only hope . . . We experienced it yesterday with 1000 pastors in Anaheim praying “ENOUGH IS ENOUGH” vowing the church will no longer be silent while the state crumbles.”

While it’s typical for politicians to campaign for policies that reflect their values, those, like Sean Feucht, who are aligned with the new religion of politics, take it a great big step farther. They believe that the Christian God has the solution for every crisis and that spiritual awakening is society’s path to advancement. Which is likely why Sean Feucht, months into his campaign, sees no reason to post policy stances on his website. He knows and speaks with a God who holds every solution. So he’ll be given the keys to unlocking the problems of homelessness, addiction and balancing the federal budget. If God is the solution to everything, then the most important thing we can do for society is to bring it back into alignment with, and in submission to, Sean’s God.

The New Apostolic Reformation(NAR), a in which movement Redding’s Bethel Church is active, calls this “infiltrating the mountain of government.” The movement is summarized well in a 2011 interview of Rachel Tabachnick, by NPR’s Terry Gross. According to a Tabachnick article for Political Research Associates, NAR teaches that communities begin to experience freedom from poverty, crime and environmental changes once demonic influences are fought off through spiritual warfare, easily explaining why Sean feels that worship and prayer are more important than policy. NAR is also referred to as Dominionism, and NAR leaders have, at the top of their agenda, the “political and societal transformation of the world.” Put less tactfully, world domination, but of course for a good cause, God’s cause, in fact.

As David Lane wrote in a World Net Daily essay,

“Can you picture what America would look like following a decade-long war – a knock-down drag-out – to return God, prayer and the Bible to public schools. To regain our Christian heritage and reestablish a Christian culture?” 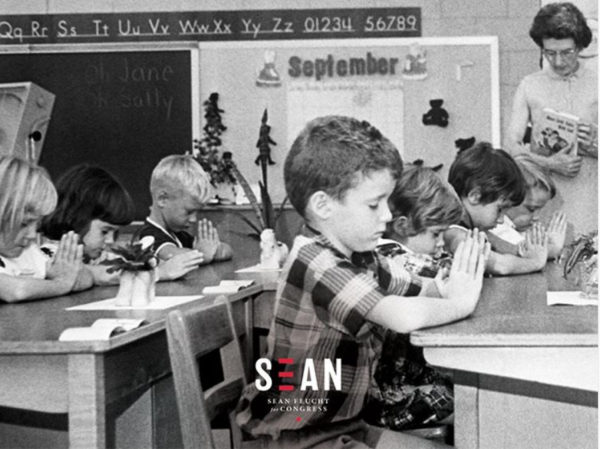 Sean might be seen as one of the answers to David Lane’s dream of recruiting 1000 pastors to run for political office.

Politico predicts that Sean is likely to lose his race for Congress.

But since Sean is part of something bigger, a new religion of politics nationwide, maybe it doesn’t matter. As he told the Christian Post, just by running he’s been a part of fulfilling his own prayers. Perhaps he’ll inspire others to run, he said.

And in the process he’s networking. 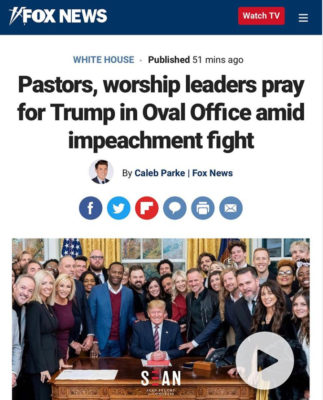 His accompanying Instagram caption reads: “Just nonchalant [sic] standing outside the West Wing of the White House after our meeting with @realdonaldtrump in the Oval Office today. ??? [pics coming soon]. I spoke to both him and @vp about the rising hope we feel for CHANGE in California and my race in district 3. They pledged their faith in our mission and will keep watching the progress! I feel more emboldened than ever – LETS DO THIS!”

Seems Sean’s got the ear of POTUS and his VP. But why would President Donald Trump spend time with a long-haired musician from California with skinny jeans, little funding and a long shot at political success?

Because Trump takes seriously the considerable influence of Bethel Music, Bethel Church, and the rest of the New Apostolic Reformation.

Maybe we should, too. 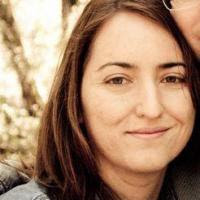 Annelise Pierce is fascinated by the intersection of people and policy. She has a special interest in criminal justice, poverty, mental health and education. Her long and storied writing career began at age 11 when she won the Louisa May Alcott Foundation's Gothic Romance short story competition. (Spoiler alert - both hero and heroine die.) Annelise welcomes your (civil) interactions at AnnelisePierce@anewscafe.com

Comment Policy: We welcome your comments, with some caveats: Please keep your comments positive and civilized. If your comment is critical, please make it constructive. If your comment is rude, we will delete it. If you are constantly negative or a general pest, troll, or hater, we will ban you from the site forever. The definition of terms is left solely up to us. Comments are disabled on articles older than 90 days. Thank you. Carry on.
114 Comments
Oldest
Newest Most Voted
Inline Feedbacks
View all comments
Post Views: 3,070