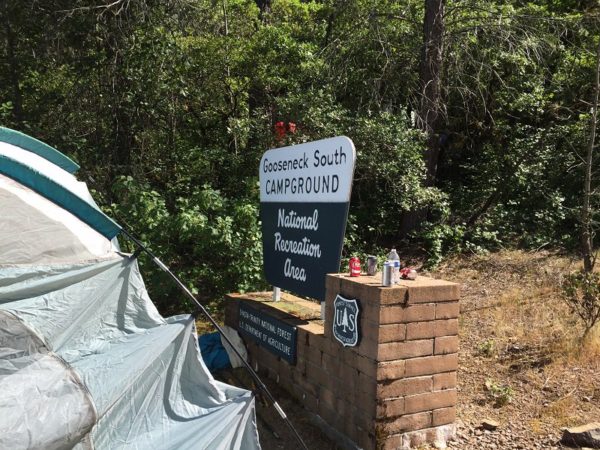 The weekend of May 19-21, 2017 saw the return of hundreds of college students to Shasta Lake on the Shasta-Trinity National Recreation Area. Law Enforcement and Investigations Officers worked late night shifts patrolling Gooseneck Campground, where approximately 40 houseboats and 500 students were camped, in an effort to increase public safety.

After last year’s media attention to the extreme amount of litter and possessions left behind by students that went viral on social media, the Forest Service worked with the universities, Shasta County Sheriff’s Office, and the marinas to come up with possible solutions.  The universities encouraged students to pack out what they packed in. The Forest created and promoted a social media campaign #KeepShastaClean. Marinas funded a trash barge to help collect garbage and also unwanted personal items that were later donated to charity. Law Enforcement Officers spent long hours educating students on proper sanitation and trash removal. There was still some trash left behind this year, but there was noticeable improvement.

Over the course of the weekend Law Enforcement Officers issued approximately 20 citations for violations associated with underage alcohol possession, possession of many types of controlled substances, and public nudity. Officers also assisted 20 stranded students that were left behind after the houseboats left Sunday morning, by shuttling two male students back to Bridge Bay to rent a boat large enough to accommodate the stranded students.

Forest Service Law Enforcement’s goal is to encourage and promote safe use of our National Forest System lands so that all users can enjoy our great outdoors. For more information about the Shasta-Trinity National Forest, please visit www.fs.usda.gov/stnf.