Editor's note: If you appreciate being able to read posts like this, and want to ensure ANC's ability to continue publishing similar content, please click here to demonstrate your support and become a paid subscriber for as little as $1.35 a month.

Hazel was a rescue dog, found in a litter of abandoned puppies in a field in Stockton, mixture of breeds unknown. She was a difficult dog in many ways. As an example, she was an enthusiastic barker, which made her either a great watchdog or something of a pain, depending on perspective and context. She had a lot of energy and required frequent exercise or she’d get noticeably bummed out.

When my daughter and her husband moved to the Bay Area years ago so that Katie could pursue her advanced degree at UC San Francisco, we inherited Hazel. Not a great candidate for life in the Bay Area, this dog, so Elise and I took her in.

We also have a yellow lab, Yampa, who, like most labs, is pure sweetheart and easy to love. Hazel, not so easy. Still, I was quick to warm up to Hazel. I’m a dog person, and I’m difficult as well, so the two of us had that in common. Hazel was opinionated, tough, and engaging. And she was easily the smartest dog with whom I’ve ever shared a roof.

Hazel knew what she liked and what she didn’t like, and what she loved more than anything else was going on hikes. When we moved from Palo Cedro to the Sunset Terrace neighborhood of Redding about five years ago, we began making use of the vast network of trails west of town, hiking hundreds of miles each year. Hazel very likely had some upland game bird dog in her mutt cocktail—she insisted on taking point on the trail, 50 feet or more ahead of us, first to see whatever there was to encounter. Once, unfortunately, that was a rattlesnake. 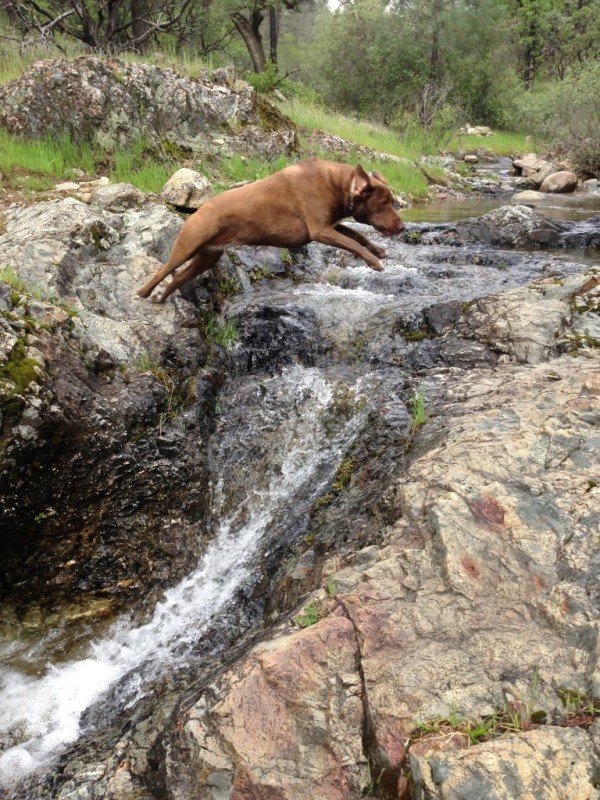 It fascinated me that when I’d lace up my shoes for a hike—same trail running shoes that I’d wear to the grocery store—Hazel somehow knew we were heading for the trails. I was providing some sort of cue, but despite my academic background in ethology I never figured out what it was. She would bark, wag her tail, and spin in circles. The barking was insistent—you’re giving off the hike vibe, so don’t try to back out. We’re going on a hike.

Last week Hazel suddenly went ill with what was probably, in retrospect, a long-term sickness. I had noticed that she had lost some weight and she started refusing to eat kibble dog food, so I switched both dogs to a diet of chicken, brown rice, sweet potato, peas and other high-protein veggies. Unlike Yampa, Hazel had always been a finicky eater, but she wolfed down the homemade cooking with gusto for weeks. But last week she threw up twice in one day, and the next day when my wife came home she was in the side yard, not responding to being called. Coaxed to get up, she had trouble walking.

I took Hazel to the animal hospital and the vet did some tests. I was already red-eyed and fearing the worst when she came back to the exam room with the results. Hazel’s liver was failing, and it wasn’t likely an acute case. Liver cancer was at the top of the list. Possibly an infection, but at this point it was pretty much a given that her liver wasn’t going to come back. Batteries of additional tests, including biopsies, might tell us what was going to end her life, but they would extend her misery and weren’t going to save her.

By now my cell phone was dead, so I couldn’t call my wife or daughter for any kind of affirmation that the decision I needed to make at that point was OK. I spent more than an hour with Hazel in the exam room, lying on the floor with her, cupping her head in one hand and scratching her remarkably velvety goat-like ears with the other—a comfort that she had often solicited when feeling uneasy. I talked to her at length about our hikes—how her need to hike had turned into my need to hike. I tried not to cry because I know how sensitive dogs are to human emotion, but wasn’t successful holding back the tears. The time finally came; Hazel and I looked at each other until she closed her eyes, and her journey was over.

I had to decide where to bury her and considered her favorite place on Earth, Swasey Recreation Area—the network of trails that we most often hiked. I know of one other somewhat-hidden dog grave there, and I’m sure that dog’s friend buried him there for the same reason it appealed to me. But my wife and I are moving back to our house in Palo Cedro this summer, and I decided to put her there. I dug her grave and before covering her up, I reached my fingers inside her swaddling and scratched her soft ear one last time. 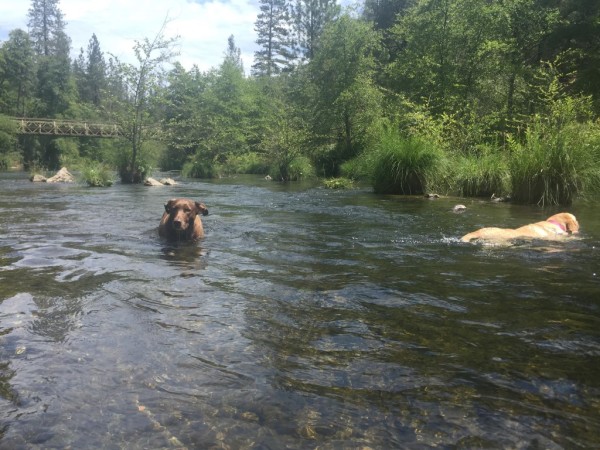 For several days I’ve been something of a wreck—wishing that it had been possible to take one last long hike with my hiking buddy. My eyes well up taking Yampa’s leash off the hook in the garage for a neighborhood walk and seeing Hazel’s leash still hanging from the same hook; or taking a first hike and swim west of town with Yampa that didn’t include Hazel; or confessing to Katie that I’m beating myself up for not realizing earlier that Hazel had a serious illness. Katie, bless her, consoled me by saying that I gave a difficult dog understanding and a happy life, and was a good friend.

I’m fascinated by the special relationship between humans and dogs. Wolves have long been known as the first species to be domesticated (into dogs) by humans. Recent theories paint a more complex picture of coevolution in which both dogs and humans grew to tolerate each other’s company, which over generations became a partnership. My business partner—Bob is not a dog person—refers to the current role dogs in that partnership as “flattering parasites.”

Wrong on the parasite bit, Bob. Even in modern times, the partnership is reciprocal. The affection of dogs elicits the release of oxytocin in humans, a neurotransmitter that modulates happiness and affection. Guess what? The affection of humans elicits the release of oxytocin in dogs. Underlying neuroendocrine chemistry aside, anyone who has ever bonded with a dog recognizes the genuine joy of that dog when you come home from work or school, and the dog’s disappointment at being separated from you. The friendship and companionship of a good dog is a joy to both the person and the dog.

I know how I feel right now will fade with time. I’ve lost people and dogs before, and the past year feels like a season of death for both my family and the icons of my age cohort—but right now Hazel’s absence leaves a gaping hole. She was my friend, and I miss her.

Steve Towers is co-owner of a local environmental consultancy. After obtaining his Ph.D. from UC Davis and dabbling as a UCD lecturer, he took a salary job with a Sacramento environmental firm. Sitting in stop-and-go traffic on Highway 50 one afternoon, he reckoned that he was receiving 80 hours of paid vacation per year and spending 520 hours per year commuting to and from work. He and his wife Elise sold their house and moved to Redding three months later, and have been here for more than 20 years. His hobbies include travel, racquet sports, taking the dogs on hikes, and stirring pots. He can be reached at towers.steven@gmail.com 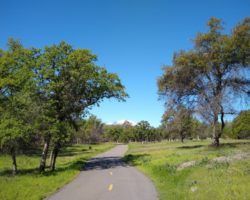