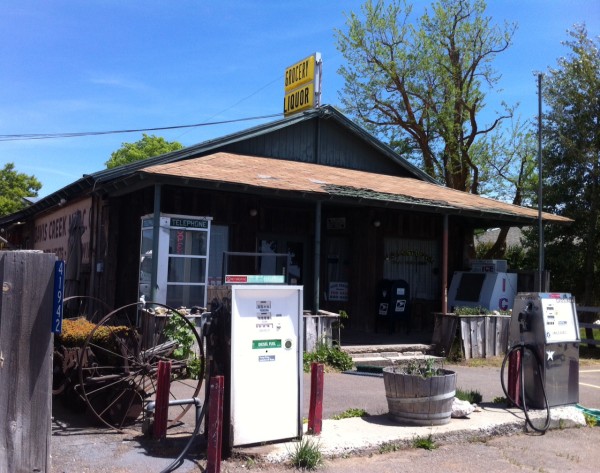 The Davis Creek Mercantile offers hot lunches and clean bathrooms. You can make a real landline phone booth call, too.

DAVIS CREEK—Travelers stopping at the Davis Creek Mercantile, 20 miles north of Alturas on Highway 395, usually ask for directions to the needle mines 8 miles up the Forest Service road in the Warner Mountains. The store—also a two-pump gas station and United States Post Office—issues permits—no charge—for folks to take obsidian—also free, courtesy of the U.S. Forest Service, and well, the people of the United States.

The mercantile is the kind of store you are happy to find when out on the open road—either if you are monitoring the gas gauge or packing a full bladder. Davis Creek sports a population of 53, and the store is the only going business around; the next town with stores is Lakeview, Ore., an hour north.

Besides gas and mail, the mercantile offers groceries, hot lunches, clean bathrooms and out front one of the last vestiges of the 20th Century: a telephone booth (and yes, the phone works). The store is known for its Taco Thursday specials and a Friday night barbecue during summer.

Behind the counter today filling the duties of manager, agent and postmaster is Neneekah Forrest—a member of the Pit River Tribe. She also takes this traveler’s question: “Have you seen any wild horses?” The answer is—yes—one horse—and, conveniently, right across the road at the Lakeshore Ranch.

Forrest happily walks out the front door and points to a bulky dark gray Appaloosa mix mixing it up with grazing cattle in pasture ground green still with the flush of spring.

“He was skinny when he got here and now he’s plump,” she said. The locals named the horse Taco Meat. She said they talked about making a T-shirt with his photo on it.

Taco Meat—who showed up in February—doesn’t realize that he’s infamous in another way—he’s classified as a nuisance horse by the Forest Service—that’s one which has escaped, straying off federal land and onto neighboring private or tribal lands. So a T-shirt would be kind of appropriate, as he is emblematic of a “complex issue” (the words of District Ranger Tim Davis) for the Modoc National Forest: Too many wild horses treading on the local ecology and economy of the region.

That place is one with the ironic, self-cancelling name of the Devil’s Garden. The “Garden” as Modocers call it is a million acres of sagebrush and junipers—an “expansive prehistoric lava flow”—sitting at the top end of the county, bordering Oregon. In the dry, much of the juniper flats are frankly boring, but the high elevations are reminiscent of the low hills around Lake Tahoe—with sugar pines and other conifers. Right now, this very arid landscape is replete with springs and running streams, little lakes and marshes and fields carpeted by bouquets of wildflowers—some shimmer so blue you think they are the water. And on this landscape, the horses are trampling the sage grouse habitat and eating up cattle forage.

“It’s not that horses are evil,” Davis said. “They are just over-utilizing the resources.”

A census in the Devil’s Garden conducted from a helicopter fly-over last winter found 2,246 horses—not including this year’s foals, according to Davis.

One hundred—101 if you include Taco Meat—of them had wandered onto private lands and off of the designated Wild Horse Territory (created by a 1971 Congressional act protecting wild free-roaming horses and burros). The Wild Horse Territory in Modoc National Forest consists of 232,520 acres in two sections between Tule Lake and Goose Lake, and the Forest Service, Davis said, has determined 206 to 402 adult horses to be the “appropriate management level.”

The horses are descendants of those belonging to ranchers, who, in the 1920s and 1930s, let them forage on the Devil’s Garden. Some escaped from ranches, others were just abandoned, said Rangeland Management Specialist Jenny Jayo.

Davis Creek’s store manager also offers this: “People just let their horses go up there. I happens more often than you think.” 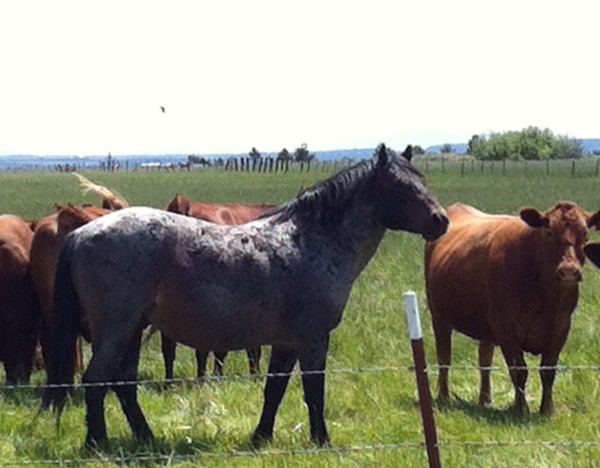 A wild horse that locals named Taco Meat has found safe pasture and some cattle buddies across from the store in Davis Creek.

At a public meeting May 31 at the Devil’s Garden Ranger office in Alturas, officials announced that a roundup of the horses—principally those on the private and tribal lands, will be conducted in September, using helicopter, trained horses and actual cowboys. According to the plan, they aim to gather 200 horses and sort them by age, sex and health. Horses over age 6 will be returned to their roaming grounds; the others will be trucked down Highway 395 to the Litchfield Corrals, where the Bureau of Land Management holds wild burros and horses until they are ready for adoption.

The roundup, according officials, is admittedly a pilot project of sorts—for the USFS to gain experience and success in hopes that funds can be budgeted in future years. This roundup has a budget of $600,000. Previously, the Bureau of Land Management has operated the roundups, but going forward the USFS is taking over, and by 2018 it hopes to make inroads on reducing the wild horse population that are actually on Forest Service land, said Amanda McAdams, Modoc National Forest Supervisor.

Back at the Davis Creek Mercantile, a new traveler—a lady truck driver from Oregon pulling a load of graphite plates to Southern California—asks for current information on the obsidian mines. She wants to bring her stepson down for a look-see. Forrest gives her the latest scoop and then returns to the subject of what will happen to local celebrity Taco Meat.

The horse, she said, escaped the fenced pasture once and nearly got hit on the highway, and then they tried moving him.

“It kicked in the grill of the firetruck—so they just left him.”

On Wednesday, he was flicking his tail and still placidly munching the grass with his cow-pals.

H.A. Silliman is a freelance writer and communications consultant. He served as the VP of Communications for the San Jose Silicon Valley Chamber of Commerce and holds a B.A. from the University of the Pacific and an M.A. from Sacramento State University. 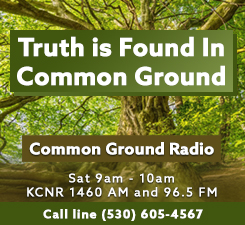