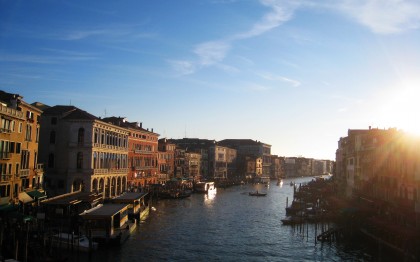 My husband and I explored Naples, Rome, Florence, and Venice during our honeymoon in Italy. Venice enchanted us with its spectacular scenery and its intriguing history:

We arrive in Venice by train after dark. A chilly sea breeze reminds us that we’re in northern Italy, in a city built on water.

A water shuttle transports us to a beautiful hotel, occupying a restored 17th century monastery, on a private island. Waves crash against the stone walls surrounding this secluded paradise. Outdoor lighting illuminates the darkness. Brown rabbits hop across the lawn, past signs admonishing visitors against chasing them. That night we sleep soundly, tired from our long journey.

The next morning, we return to St. Mark’s Square to find the entire paved plaza — the space of two city blocks — flooded with a foot of water. Tourists stand on platforms lined up across the square, avoiding the high tide. The line to get into the city, and out of the flood, appears to be at a standstill. A few brave souls carry their shoes and walk barefoot on the cement, through the cold water of the Adriatic Sea. We roll up our pant legs, slip off our socks and shoes, and join them.

We meander through narrow streets, trying to maintain a sense of direction amid the maze of cafés, souvenir shops, and high-end retail stores. We walk across bridges connecting the fractured city, and admire rows of shiny black gondolas moored in the lagoon. Many restaurants post pricey tourist menus in the windows, so we search for cafés charging a fixed rate for all customers. Our efforts are rewarded with tasty seafood, pasta, and pizza at reasonable prices.

Local shops boast handmade crafts, primarily Murano glass jewelry and elaborate Venetian masks. The variety of papier-mâché creations on display is astounding: masks of the stars and the moon, masks of lions and elephants, masks limited only by the designers’ imaginations. One mask is painted red, white, and gold, with sheet music forming a court jester’s hat. Another mask, decorated in shades of blue and silver, resembles the head of a robot, with gears and computer chips pasted to its face.

As the sun sinks lower in the sky, we hop on a vaporetto to tour the Grand Canal. The cool wind blows against our smiling faces as we soak up the sights of Venice. Water taxis zip by our water bus, while gondolas glide past restaurants nestled on the edge of the canal. The hour-long ride takes us past beautiful buildings, as well as the Rialto Bridge, the oldest bridge spanning the Grand Canal.

The following day, we return to St. Mark’s Square to explore St. Mark’s Basilica. The Byzantine-style cathedral shows its age, but also its splendor. Colorful mosaics cover the ceiling and the interior of the building. Despite the crowd, the expansive church is eerily quiet.

We step into a side chamber known as the treasury room. This museum offers a close-up look at ancient relics, including the bones and teeth of dukes and saints. We hadn’t expected to see such a macabre display in a room filled with priceless ancient artifacts. These venerated people — and their remains — were clearly treasured.

Next we take a self-guided tour through the Doge’s Palace, the former residence of the duke of Venice. Despite the duke’s impressive lodgings, posted signs state that he was simply a figurehead while the aristocratic elite ruled Venice.

The gothic palace-turned-museum houses galleries and chambers filled with art and political intrigue. As we explore each room, we see paintings perched in ornate frames, many featuring a winged lion, the symbol of St. Mark. Signs posted in Italian and English explain the city’s history as a powerful and independent city-state. An armory displays everything from swords and suits of armor to crossbows and an ancient Gatling gun. Guards — dressed in business attire rather than metal armor — pace the halls, reminding visitors that photographs are not allowed inside the palace.

Our legs carry us along narrow passageways and down stone staircases. We cross the Bridge of Sighs, connecting the palace to the prison. Below sea level, in the depths of Venice’s prison, we find rows of windowless cells. The prisoners must have crouched to fit through the squat doors. If we had signed up for a guided tour, we surely would have heard the tale of Casanova’s famous escape from this Venetian prison. As our day’s adventures come to an end, we head for the freedom of the city and the sea.

We stand on the edge of St. Mark’s Square one last time, our eyes taking in the sparkling sea. The sound of boats crashing through the waves fills our ears. A chilly breeze reminds us we’re in northern Italy, in a city built on water. The next morning we’ll be on an airplane bound for home. But at this moment we couldn’t be happier. We have gotten our feet wet in Italy, and created memories that will last a lifetime.

If you would like to see more of Italy, check out my photo gallery of Venice.

Journalist Lauren Brooks lives in Bellevue, Washington. She is a CSU, Chico alumna who graduated with a B.A. in journalism in spring 2006. She can be reached at lmbrooks.work@gmail.com.

lives in Bellevue, Washington. She is a CSU, Chico alumna who graduated with a B.A. in journalism in spring 2006. She can be reached at lmbrooks.work@gmail.com.