Editor's note: If you appreciate being able to read posts like this, and want to ensure ANC's ability to continue publishing similar content, please click here to demonstrate your support and become a paid subscriber for as little as $1.35 a month. 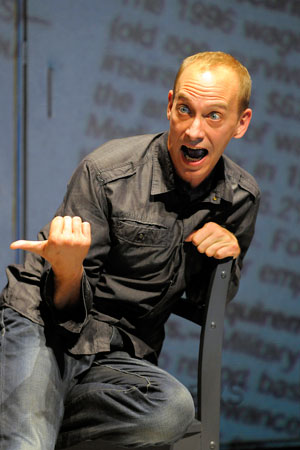 Anybody who’s ever had – or been – a kid can probably remember those mix-and-match picture books with pages split three ways: a set of miscellaneous heads, assorted midriffs and a selection of feet or tails. The joy of it was to permute the various bits into as many fanciful Push-Me-Pull-You creatures as you can dream up.

Tiny Kushner, which just opened its six-week run at the Berkeley Repertory Theater, has that same helter-skelter excitement. To call it a grab-bag of half-baked ideas in no way demeans it. The five one-act plays on the bill are mere marginal doodles, to be sure, but they’re doodles culled from the notebook of a genius.

Pulitzer Prize-winner Tony Kushner, who wrote “Angels in America” and “Homebody/Kabul,” returns here to many of his usual themes: ironic introspection, “deviant” love, war guilt, America’s presumed exceptionalism, the interior décor of the afterlife and the ever-present (but unfathomable) Angels among us. But in this sketchier, one-act format he combines these elements even more kaleidoscopically than in his longer works.

In the Berkeley Rep production, Director Tony Taccone rings all these kaleidoscopic changes with just a foursome of talented, versatile, role-swapping actors. Taccone and Kushner go back a long way. Nearly a quarter century ago they collaborated on the first-ever staging of “Angels.” Now, after 25 years or working together, it’s almost as though writer and director fuse into a single intelligence, an undivided theatrical self.

That self can sometimes be a tad self-indulgent, viz. the two Tiny Kushner skits set in psychiatrists’ offices. For all their verbal stunt-pilotry, these vignettes might not exactly grab you – unless you share Kushner’s fascination with such arcana as homoerotic aromatherapy or the rococo furnishings of Richard Nixon’s mind.

But the remaining three playlets have all the spontaneous éclat of the best jazz improv. As in jazz, it’s all about startling tonal and thematic juxtapositions. In the very first scene, Kushner collides an unlikely pair of has-beens: an American inspirational crooner meets the deposed queen of Albania. What’s more, they’re both freshly deceased and condemned to spend the rest of eternity together in an airless, crater-pocked, moonlike limbo.

Looks like it could be a pretty rough purgatory for both of them. They talk right past each other, thanks to their total disconnect on the most fundamental level of reality. The American preaches an upbeat gospel of continuous, unfettered self-reinvention, while the poor queen is mired in the tragically inflexible exigencies of factual, “ticking-tocking time.”

Another Push-Me-Pull-You in the Tiny Kushner menagerie is the last playlet on the bill. It features Laura Bush in a storytime reading for a bevy of mannerly, attentive children. Normal enough, you’d think, for a sweet Texas matron who finds herself cast (somewhat to her own surprise) as America’s Librarian-in-Chief. Except, in Kushner’s fancy, the children here happen to be Iraqi and dead (collateral damage) and – at least to us in the audience – invisible.

The dead children do have names, according to their (literally) Angelic classroom teacher. But those names may not be revealed, for reasons that must also remain undisclosed. Unfazed by such riddles-within-enigmas, Mrs. Bush ploughs ahead with her chosen storytime text: “The Grand Inquisitor,” from Dostoyevsky’s “Brothers Karamazov.”

Valeri Mudek brings just the right saccharinity to the roles of the classroom Angel and the inspirational crooner. Her baby-blue stare of unflappable innocence is a perfect foil for Kate Eifrig’s down-at-the-heels Albanian queenliness or the tottery composure of a Laura Bush.

Composure is also the watchword for Eifrig’s performances as the therapist in the two psychoanalytic skits. In both of them, she anchors a logorrheaic patient, played by J.C. Cutler, who’s forever on the verge of sailing away on updrafts of his own rhetoric. With his motor-mouth diction and rumpled bonhomie, Cutler manages to seem perfectly natural delivering epigrammatic riffs that the rest of us, mere mortals, could only ever utter in our dreams.

Stellar as these performances are, though, Tiny Kushner‘s flashiest tour de force is by Jim Lichtscheidl, who single-handedly plays every one of the dozen-odd parts in the evening’s longest playlet. Those roles include an assortment cops and guards, a neo-Nazi convict, a Tea Partyish anti-tax guru, a jaded payroll clerk, a teenage punk computer-hacker, Rudi Giuliani and Bill Clinton.

In a crescendo of staccato mini-scenes – some as short as only a sentence in length – Kushner builds up the saga of a tax-evading pyramid scheme. The story is based on a real-life episode in New York in the 1990s. The scam starts out as the pipe-dream of a wingnut libertarian, then spreads exponentially via internet and word-of-mouth.

By the time the IRS catches on, hundreds of New York cops are already speciously exempting themselves from withholding taxes. Giuliani, the law-and-order mayor, pronounces the scheme purely venal, without any ideological import. But the last word in the script goes to Clinton, the Blue Dog “reformer,” who triumphantly proclaims “the era of Big Government is over.”

But that was then, before the era of multi-trillion-dollar bailouts and stimuli and military crusades. Taking the current Berkeley Rep production as a down-payment, let’s hope it’s not too long before we can look forward to another burst of acidly funny news-themed doodles from the Kushner-Taccone duo.

Comment Policy: We welcome your comments, with some caveats: Please keep your comments positive and civilized. If your comment is critical, please make it constructive. If your comment is rude, we will delete it. If you are constantly negative or a general pest, troll, or hater, we will ban you from the site forever. The definition of terms is left solely up to us. Comments are disabled on articles older than 90 days. Thank you. Carry on.
Post Views: 261