Every year, especially around the holidays, I wish for snow.

All those years of wishes came true Tuesday night and on into Wednesday morning. When the first flakes fell Tuesday evening, I joked about it, and posted a photo on FB and kidded that it was the great Redding snowstorm of 2019. “Be strong, Redding,” I wrote. I joked because snow rarely sticks around in Redding. It’s a novelty. 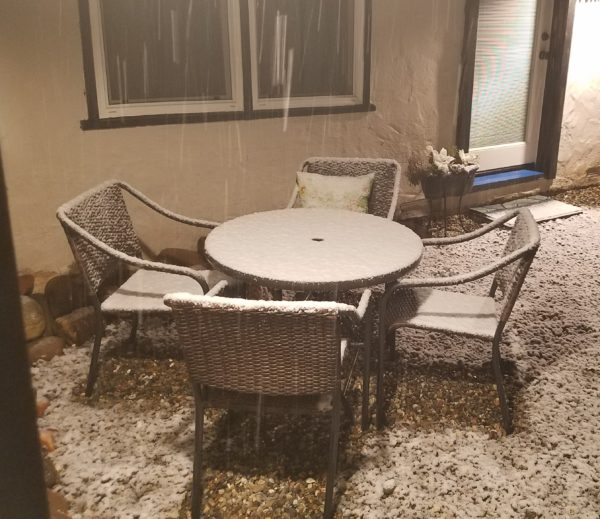 At bedtime, I cranked up my electric blanket and opened my bedroom blinds a bit so I could see the sky during the night. But the prospect of snow had me so excited that I couldn’t sleep. I was like a little kid, and got up every few hours to peer through the blinds to check the snow status. Each time, I was not disappointed. Yes, snow was still coming down. I was elated.

On it snowed through the night. Those big, fat flakes multiplied and piled high. By morning Redding and the surrounding areas had received between 10 to 16 inches of snow, more in  higher elevations.

I woke up to this outside. Oh  happy day! 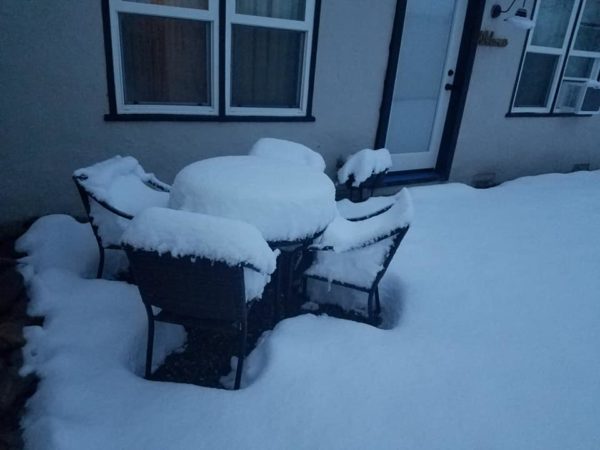 Unfortunately, inside was a brownout, my first. I quickly learned what electrical things would work, and which would not. On the would-not-work list were the furnace, toaster, microwave, all LED lights, the electric fireplace/heater, the washing machine, the stove, the television, the outdoor dusk-to-dawn lights, the electric blanket and probably some other stuff I’m forgetting or didn’t notice.

The would-work list included incandescent lights (I have one lamp with one incandescent bulb), the gas range if I used a match to light it manually, and most amazing of all, my computer, my wifi, my dryer and my Kitchen Aid mixer.

I, unlike my son and his family in Cottonwood, and many others, was lucky enough to have running water, and I had hot water, thanks to a gas hot water heater.

Wednesday morning 30,000 homes were without power in Redding alone.

Let me clarify, all those times I wished for snow, I was wishing for “Walking in a Winter Wonderland” snow, not Donner Party snow.

Being the optimistic person I am, I decided to make the best of it. I planned to spend the day writing, knitting and working on a little cake order for a couple’s Valentine’s Day anniversary. But without heat, the temperature in my 80-year-old stucco house quickly dropped. I piled on the clothes: Long underwear, jeans, a turtleneck sweater, a sweatshirt and a down jacket. Wool socks, two neck scarves and a knitted wool hat. I looked like the Abominable Snow Doni.

I made coffee, and felt somewhat guilty for it, since my twin was in her home a few miles away without any electricity, so she was making coffee outside on her barbecue.

That’s what impressed me about this snow storm: we’re a resourceful people who make do, and make the best of inconvenient situations. Many people “camped” inside their houses, and those lucky enough to have wood-burning fireplaces, or better still, wood-burning stoves, were rich indeed.

On Facebook, friends and friends of friends shared how they were coping. Between the heavy snowfall and the power outages, our entire region pretty much came to a stop. All schools were closed. Many businesses were closed.  The result was many people looked at Wednesday as a potentially fun and relaxing snow day. Kids played in the snow and made snowmen. 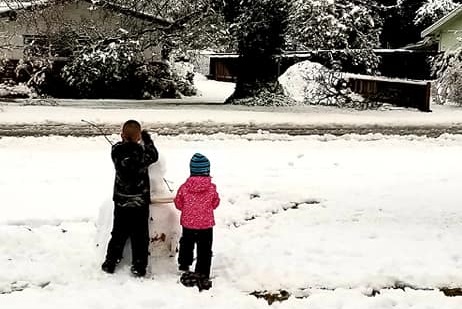 No doubt some frisky couples used the snow day as a romantic opportunity to stay indoors and do whatever came naturally to keep warm.

Early in the snow storm, people hadn’t lost their sense of humor, evidenced in one FB post, where a man replied to a woman who explained she and her husband were fine because although their home’s power was out, they had a wood stove, and tequila.

The man replied: “I was without tequila for our snow storm. It was difficult. Fortunately, I had chocolate. A friend with all-wheel drive took me grocery shopping today. I would have gone to the liquor store but she’s a 12-stepper and I didn’t think I should.” 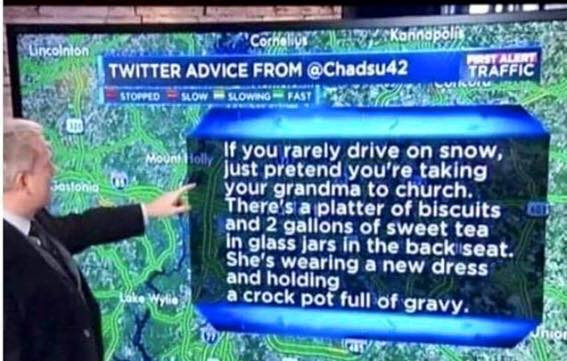 Being the pessimistic person I am, Doni’s Fun Snow Adventure took a turn for the un-fun when the power in my house went out completely, right in the middle of my Kitchen Aid working on some very important Italian buttercream frosting. How rude. As of this writing, there remained more than 13,000 REU customers without power. That’s not counting residents outside Redding city limits, where power is still not functioning.

From the silence inside my frigid house, I could hear the snap and crack of limbs and small trees falling outside. Oh, those poor, poor trees.

Periodically a hunk of heavy snow would slide from the roof and when it landed, sounded like a body thudding to the ground.

When I ventured outside to removed snow from my porch swing and front steps, the young husband/father next door was using a long pole to dislodge a large limb that had fallen over his chimney. A neighbor across the street yelled over to say that he’d lost a beautiful orange tree in his back yard.

My neighbor to the north, who’d just invested in a new roof last summer, said some large oak branches had crashed onto her new roof, but she wouldn’t know the extent of the damage until after the storm. I tried to knock as much snow as possible off the grand mulberry tree in my back yard, one of only two backyard trees I have, but I just couldn’t reach the most crucial branches. Nearby, near the alley, the second back-yard tree, a crepe myrtle, had been decapitated by snow. It will be a miracle if it survives.

I heard stories of people whose driveways were blocked so there was no way out and no way for anyone to get in, either. I heard stories of patios, garages, vehicles, and parts of homes that were destroyed by falling tress and branches. In fact, I think it’s fair to say that everyone who had snowfall in their yard had some kind of damage. I know I did.

I saw FB posts about little kids who’d worked so hard on their Valentines to take to school today, and were crushed with disappointment that their school would not be open for Valentine’s Day.  (Surely teachers will reschedule the Valentine’s Day activities.)

Suddenly, I took back all my snow wishes.  And on Facebook, it was apparent that most everyone else was over the snow, too. Suddenly, the snow was not fun anymore. It was a disaster with a sense of Deja Vu … like, what does this remind us of? Power outages, displaced people, damage caused by a disaster, businesses closed, people in discomfort?

A Facebook friend expressed what many of us were feeling.

We’re not whiners. Here in the north state’s valley, we’re sturdy people, and we carry on and pretty much handle with grit whatever Mother Nature throws our way. Neighbors check on each other, and we try to make the most of the worst situations. We’ve survived fires, and we routinely endure some of the hottest temperatures in the world.

We’re used to hot. We’re hot people. We’re not cold people. We own lawn chairs and air mattresses, not snow shovels. We own misting systems and swamp coolers, not generators. We wear flip flops, not snowshoes. We plant citrus trees and all kinds of fruit trees, because, after all, we live in sunny northern California.

I’m writing this Wednesday night in a house that’s so cold that I can see my breath when I sigh. Yes,  my sister offered to let me stay in her home, because her power had been restored. But to get there I would have had to have found a 4-wheel-drive Uber driver, and I just didn’t want to mess with it. So I’m staying put. I’m fine, all bundled up. As an aside, this experience reminds me that here in this city, people regularly sleep outside in even colder temperatures than are inside my home at the moment. I’m fortunate to have a house and a bed to sleep in.

Speaking of beds, I’ll be heading there soon, dressed in four layers of clothes, inside my sub-zero sleeping bag, under my covers.

I can hear rain pelting the windows, which, with any luck, will melt the snow. Fingers crossed that come tomorrow, we’ll all have full electricity again. And maybe I’ll be able to carefully navigate down my skinny driveway, and take care of some business away from the house. Of course, I have no doubt that with that melting snow will come more bad news: flooding.

But first things first. First, let’s get all the power restored. Next, without blankets of snow, we’ll be able to assess the storm’s damage, face it, and deal with it.  I know I’m not looking forward to that part, and I have lots of company.

But once again, a north state disaster will provide work, such as for tree companies and fence-builders.

And on an even more positive note, I’ll bet that nine months from now, there will be a bumper crop of babies born. We can call them Snow Babies, born to parents who found Mother Nature’s most wonderful way to stay toasty, and share the love, two days before Valentine’s Day, here in northern California.

And for the rest of us, I wish us all a warm, safe, love-filled, snow-less Valentine’s Day.