Tanja Eisenhardt and Barry Marris are the new owners of the Igo Inn restaurant, which they plan to reopen on Wednesday. The building, built in 1886, sat vacant for two years after previous chef-owner Rich Buck of Lewiston died suddenly the week before the restaurant was set to open in 2009.

Under the new ownership, the Igo Inn will serve lunch and dinner Tuesday through Sunday, but Barry suggests diners call before driving out. The Igo Inn is located at 13976 South Fork Road in Igo. Call (530) 396-2900.

Here is Barbara’s interview with Barry Marris, who will cook alongside Chicago chef Brandon Hurley.

Both you and Tanja have diverse and interesting backgrounds, personally and professionally, and were restauranteurs before. Care to give us a brief biography or two? How did you start out in the business, why did you step away, and what made you decide to take it up again?

I’m an exile from Michigan, and Tanja, from the Czech Republic. I left Michigan to finish college at San Francisco State right around the Summer of Love … I wanted to see those liberated girls with flowers in their hair, and also attend classes occasionally. After college I enrolled in a Japanese Studies program at Waseda University in Tokyo. Seven years later I returned to the States and taught at a private high school in New Hope, Pennsylvania, for a year. In Japan I had been teaching English as a Second Language. At the American high school in New Hope, it was like teaching English as a third or fourth language … yikes! I had no idea how bad high school students were with their own lingo.

I moved back to SF with no idea of how I might earn a living – teaching was not an option. I went to Bartending School and wound up in Yountville tending bar in a Filipino restaurant, circa 1975. I like to think I was the precursor to the French Laundry, Thomas Keller’s own pathfinder. I finally got a job tending bar in the Financial District and worked there for about five years before I bought my own joint, a neighborhood bar in the Marina District called Barnacles Saloon. It was there I met my not-so-soon-to-be-bride, Tanja, sometime in the early 80s … she was shooting pool with her soon-to-be husband in another bar down the street from Barnacles. Always the prescient one, I invited them both to Barnacles (yeah, he could come, too) and they became a regular part of our tavern family. Tanja was fresh off the boat, having just slipped through the iron clad curtains of Czechoslovakia, braving danger and intrigue, hell bound and determined, on a mission of hope and rebirth, wending her way through struggle and strife on a one-way course — to Barnacles Saloon. What those Czechs won’t do for a few cold beers!

Barnacles closed (thanks to an evil landlord), and everyone went separate ways. I wound up in Point Reyes Station managing a restaurant-bar. In 1994 I took a ride to Guerneville, along the Russian River, looking for a restaurant/bar to call my own. I found an ad in a real estate office window for an old roadhouse called “The Blue Heron” in sleepy Duncans Mills, a tiny burgh on the river just three miles from the coast. Love at first sight. We opened in 1995.

Within a year, thanks to good luck and some gold-standard mentoring from my friend Chef Rene Fueg, The Blue Heron received a four-and-a-half star review from Sonoma’s only recognized food critic, Jeff Cox. Although I felt the review was a bit unearned, I bit my tongue and accepted all the adulation like a man! The facility lent itself well to lots of activities and we showcased a lot of good music as well as good food. The Blue Heron became a vital community venue.

Tanja and I, although we hadn’t seen each other in a long while, still managed to keep in touch, and she would visit The Heron from time to time. Then one day, some 25 years from when we first met in San Fran, we both found ourselves spouse-free, got together, and are living happily ever after. 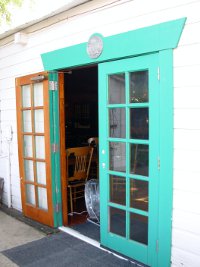 How in the world did you get from Duncan Mills to Igo?

The Blue Heron was sold in 2006. We had been living near Guerneville with our four cats, two dogs, and trusty gecko, Gordy. Tanja, a professional graphic designer, was working for a prestigious San Francisco financial advisory firm, from our home. This kept us afloat while I was testing the waters with a few other projects, including a stint as a bartender at the Marin Country Club, a book, and a crazy line of inventive greeting cards.

Workwise, we were both getting itchy about not doing what we wanted to do, and one day Tanja just blurted it out: “I wanna have a restaurant!” I told her to take some ibuprofen and call me in the morning … No, I just swallowed hard and started sweating bullets. We started looking around, hoping to find something akin to The Heron: somewhat remote, rural, with lots of community spirit, and lots of room for diverse activity. A colleague of ours, whose son lives in Weaverville, said she saw a cool place for sale called The Igo Inn on the Internet. We came, we saw, we fell in love. Voila! Fade-out Duncans Mills, fade-in Igo. 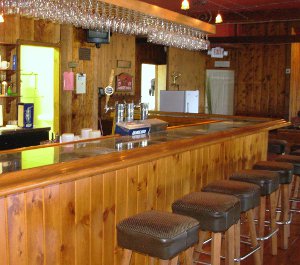 It must be kind of a culture shock to move from rural Sonoma to rural Shasta
County … or is it?

No, no culture shock. Sonoma has lots of cultural activities, especially for The Haves. But not unlike other disparate regions of California, Sonoma has its share of Have-Nots. Especially true in the western part of the county, where we lived. For whatever might have been missing we imported our own cultural activities to The Blue Heron with a variety of music and special events. Squeeze any given community and all kinds of “culture” will pour out at the seams. That’s what we intend to do with the Igo Inn, import some cultural activity, and squeeze the rest from the local talent reservoir.

On a smaller cultural level, we’ve noticed differences. Very few supermarkets per capita, or per neighborhood, around Redding. In Sonoma, take a town like Sebastopol, a population of around 7,000, there are at least six supermarkets, all of which are very good supermarkets. Movie theaters? In Redding, none (or none I can find). Watering holes, bars: very few and far between. Strip malls and malls galore. Every business and eatery seems to be in a strip mall or mega mall. Fast food is king: not just one of each famous franchise, but often two! 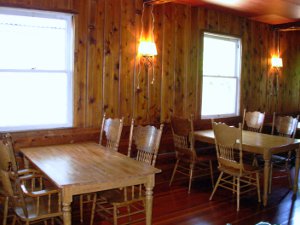 This is going to sound corny. Wait, before I say it, let me ask you a rhetorical question. You don’t have to answer out loud, I’ll answer my own question … What is it that you (people) like about places you often go to for food, entertainment, or relaxation? I think the unspoken mystery ingredient is hospitality. Peel away all the rest. If the food is mediocre, folks will overlook it, or find it acceptable if the hospitality is warm and real. If the place has personality, the rest is manageable.

So, when you ask what we are going to do to get people to drive to Igo, the answer is give them what they want most: real hospitality. And add to that a good pinch of diversity, as well. And fun. Having said all that, let me assure you that there will be nothing mediocre about the food and beverage, either.

Tanja and I are Foodies. But hospitality, diversity, and fun are all adjectives that go well with food and drink. Who wouldn’t drive to Igo for a fabulous burger, or an exotic tasting appetizer, a fun bar scene, and people who are just damn glad to see you? I have often said that most of the people in any given dining room are not there because they are hungry. They are there to be doted on. Give them good dote and good food, they’ll be back. Give them good food and bad dote, they won’t. And one more thing about the drive: Igo is the same distance from Redding, maybe shorter, as Redding is to Anderson, a short ten minutes. The difference is that one of those 10-inute drives is a yellow brick road that leads to the Emerald Cities of Igo and Ono. And you ask why go to Igo?

The menu will be diverse. And fun. We did a lot of seafood in Sonoma. I’m a little worried about what the availability will be for us in Shasta. Definitely some good country fried chicken, some world class fish & chips, steaks, pasta, and maybe some signature Pacific Rim dishes to sneak in my penchant for Asian cuisine. A great bar menu will also be part of the experience, something well beyond chicken wings and zucchini sticks … and we will have frugal specials and senior discounts on a regular basis. Good food, good times, good friends.

Will there be special events like dances or music?

One of the things we did at the Blue Heron to attract other communities was to offer music programs on a regular basis, but programs that started early and ended early, so that the drive and the clock weren’t big considerations. We also did a series of “Dinner Shows” featuring touring nationally known musicians, or well known musicians from the area. Country Joe McDonald (friend), Ramblin’ Jack Elliott (friend), Nina Gerber (friend), Maria Muldaur (no friend), Geoff Muldaur, John Renbourn (of Pentangle), Dave Von Ronk (legend), John Stewart, Holly Near, Tom Paxton, Utah Phillips, to name a few … guests would enjoy dinner and then, without leaving their seats, enjoy a full show from our dining room stage. Very memorable experiences.

Local musicians played from 6 p.m. to 9 p.m. almost every night in the bar at The Blue Heron. On Sundays, our biggest day of the week in the summer, we’d have a live band outside in the Beer & Oyster Garden, featuring a local group and lots of barbequed oysters. It was events like this that made it a real community gathering place. We think the Igo Inn can offer up a similar plate of community-based events and entertainment. We’ll give it a shot, anyway … and look forward to creating a place, and a scene, where our community and other communities want to be and want to gather. In the end, it’s about community, not business. Because without the former there is no latter.

Barbara Rice is a native Igonian. Upon discovering the Beatles at age 9, she picked up an atlas and figured out how far England was and how long it would take to get there (5,371 miles, 12 hours). Though gainfully employed, she regards work as a necessary evil to finance vacations. In her spare time she looks up cheap airfares and daydreams about her next trip. She never did meet Sir Paul, but she knows where his office is.

A News Cafe, founded in Shasta County by Redding, CA journalist Doni Greenberg, is the place for people craving local Northern California news, commentary, food, arts and entertainment. Views and opinions expressed are not necessarily those of anewscafe.com.

Barbara Rice is anewscafe.com's administrative assistant. She grew up in Igo listening to the devil's music, hearing tales of WWII, and reading James Thurber and Mad Magazine while dreaming of travel to exotic lands. She graduated from Shasta High School, Shasta College, and San Francisco State University. After too many blistering Sacramento Valley summers, she's traded it all for the ocean breezes of Humboldt County. She's been told she's a bad influence and that makes her very happy. She tweets, travels, and spoils cats. There's a dance in the old dame yet. 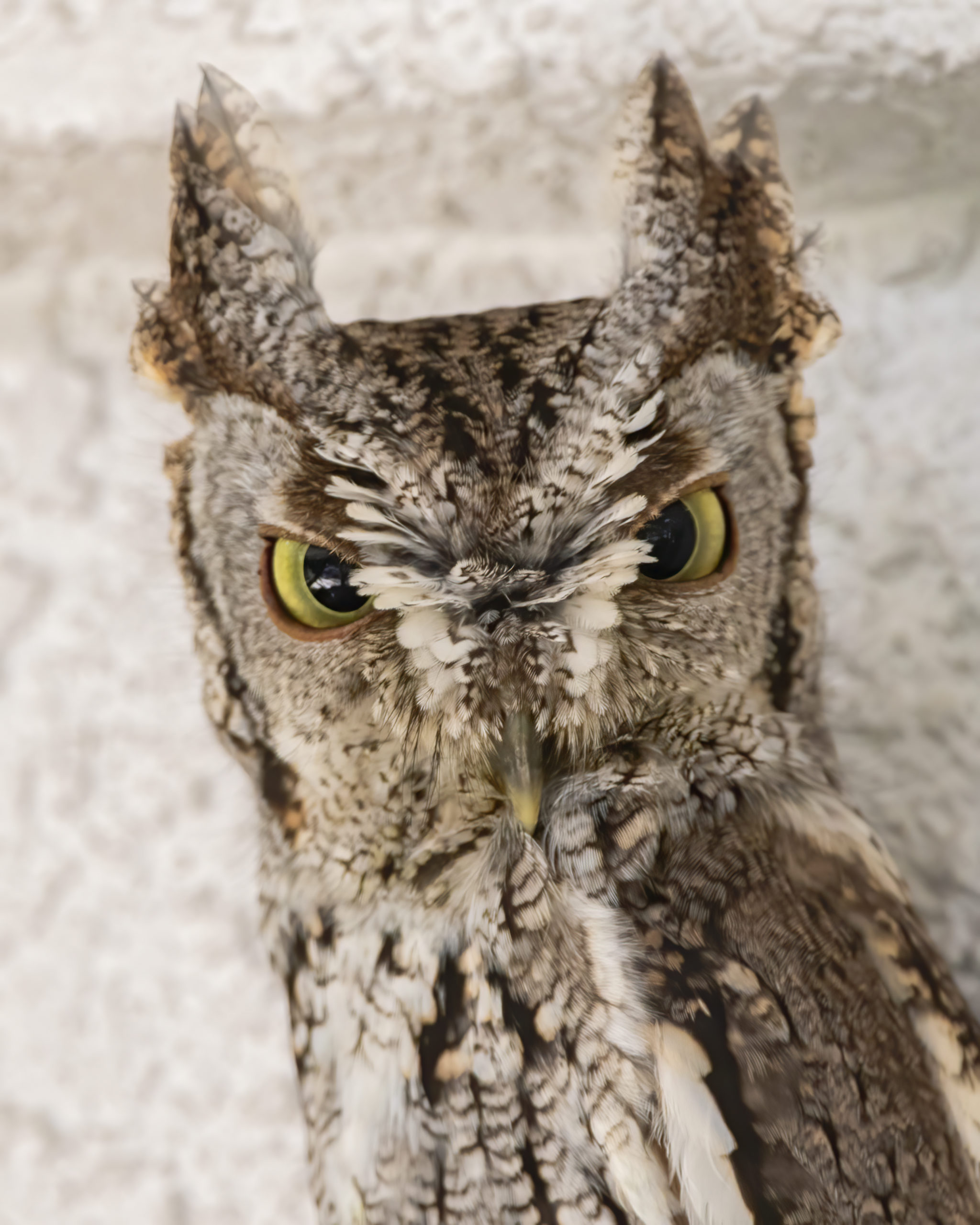 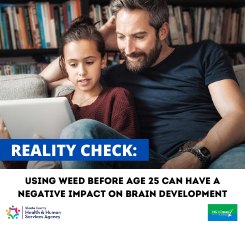