Out of Town For Memphis Minnie’s BBQ

Femme de Joie and Amico del Signore have been enthusiastic fans of KPIG radio for several years after reading about it from a column by Jim Dyar in The Newspaper Of Which We Dare Not Speak Its Name. It was through the PIG that we first got wind of a BBQ joint in San Francisco called Memphis Minnie’s Barbecue Joint and Smokehouse. Being in The City on unrelated business, we made it our business to pay Memphis Minnie’s a visit.

Before we go any further, let’s stop right here and clarify a few points:

— Real barbecue is obtained by hours and hours of smoking and slow-cooking large cuts of meat over a wood fire, with maybe only a “mop sauce” to baste.

— Real barbecue is not defined by sweet red sauce slathered all over grilled meat, even if it is your special super-secret recipe that you’ve developed over years of experimentation. That stuff is fine for a few chicken breasts or some ribs you whipped up after work, but would be a travesty to drown real barbecue in. 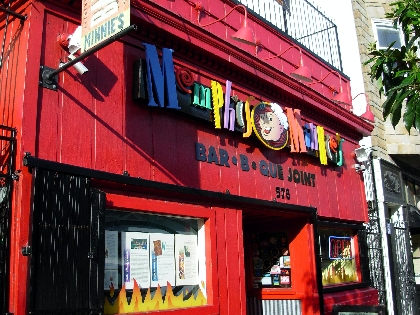 Even in as colorful a neighborhood as the Haight, you can’t really miss Memphis Minnie’s. 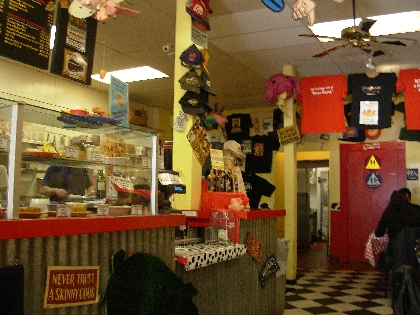 The place is pretty small, maybe about ten or twelve tables, most of which seat two people. If you hit it at a busy time, expect to wait for a table. They do a lot of takeout — on a nice day you can get an order to go and head down to Buena Vista Park for a picnic lunch that’ll kick Subway’s butt.

You walk up to the counter and order. The very helpful and friendly counterman will explain the difference between a plate, a taster, or a sandwich.

In the glass care to the left of the cash register are plates and bowls filled with some of the specialties, such as deep-fried peach pie, BBQ pork rolls, or Smokey Mountain Wings. Place your order, leave your name, and have a seat. There’s a self-serve soda dispenser and flatware around the corner to the right of the cash register; if you order beer or — surprise! — sake, they’ll hand that over right away.

We barely had time to take a quick tour of the place and snap a few photos before our lunch was ready.

A. Del Signore ordered Memphis Sweet-Smoked Pork Plate ($12.75) which came with a corn muffin and a choice of two sides. 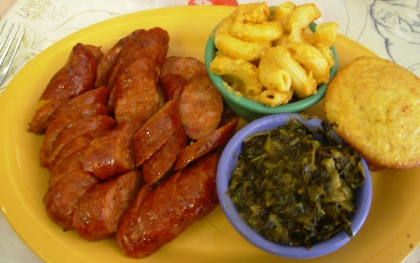 M. de Joie went for the Smoked Cajun Andouille Sausage Plate ($12.75). We both chose Potlikker Greens and macaroni and cheese for sides. 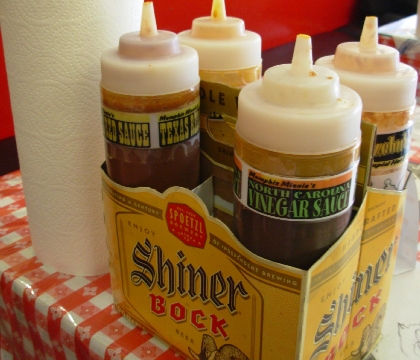 On each table is a roll of paper towels and a cardboard Shiner Bock Beer six-pack with squeeze bottles of MM’s own house-made sauces: Texas Red Sauce, North Carolina Vinegar Sauce, South Carolina Mustard Sauce, and Beelzebub’s Breath (“it’s stupid hot!”) Sauce to add to taste. If you want to drown the wood-smoke taste with sauce, it’s your business, but the good folk at Memphis Minnie’s won’t be held responsible.

Those tables, by the way, are covered with clear plastic, through which you can take a peek at cartoons done by previous diners: 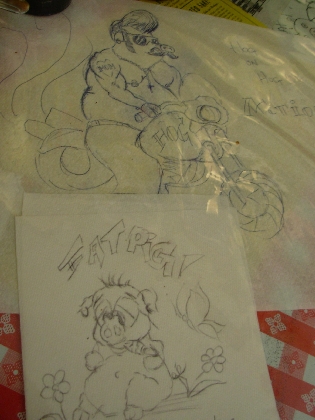 We poured tiny samples of each of the sauces on our plates to dip the meat into (by far our favorite was the slightly sweet, vinegary mustard sauce). We mixed the sauces. We ate the barbecue as God Almighty Himself intended, plain pig pickin’, the porker naked as the day it was born. There were no words to describe the fine barbecue. Mostly we sat and ate in rapturous silence, now and then picking off each other’s plates, then leaning back and gazing at each other in a haze of pleasure. “DANG, this is GOOD.”

The corn muffin was a corn muffin: M. de Joie personally prefers the ones she’s been making for a million years from the recipe off the Albers box, but there was nothing really wrong with these, and Lord knows they were ten thousand times better than that sugary mouthful of cakefluff Marie Callendar’s dares call cornbread. The mac and cheese was divine: oversized macaroni baked in a cheesy bread-crumby sauce.

But what reallywowed us were the potlikker greens. Sweet and hot and tender, these chopped stewed greens brought tears to our eyes. The counterman wouldn’t give up the recipe, acknowledging only the greens were collards and there was a healthy splash of the mustard sauce. If there was a disappointment, it was only that there wasn’t really enough potlikker at the bottom of the bowl to dip the cornbread into.

And then, after clearing our plates, Femme de Joiedid something she almost never, ever does: She went back up to the counter and ordered more food. A slice of the homemade pecan pie ($4.75) for her: 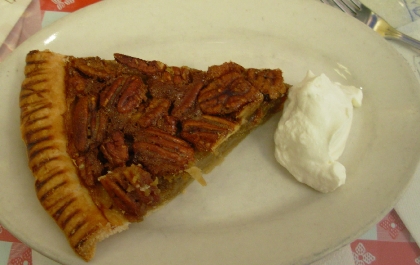 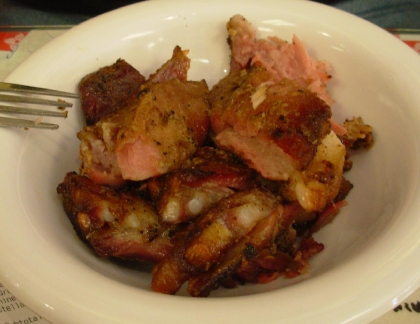 The pecan pie was exactly as promised: made from scratch with a homemade crust, served with honest not-out-of-a-spray-can whipped cream. Packed with pecans and a nearly-creamy filling, it was worth every calorie. As for the rib-tips: lean, peppery, smoky-flavored bits of pork melted off the bone, crispy bits of fat lending moistness and flavor. When we were done it looked like a pig had been staked out on an anthill.

While we were dining we kept a close eye on what the tables next to us were having. One young man brought back what he told us was the Minnie’s Maxi Cheese Burger ($9.95), made with pimento cheese and house-cured bacon, served on a bun that had more in common with a Kaiser roll than a spongy Wonder Bread bun. It came with a mountain of fries. He said there was nothing like it anywhere.

It is to our everlasting regret that the next day was Monday, when Memphis Minnie‘s is closed: We woke up with a barbecue hangover, craving more. We didn’t get to try the fried peach pie, the pit smoked beans, the sweet potato pie, or smoked pastrami. We’ll be back.

Femme de Joie’s first culinary masterpiece was at age 4, when she made the perfect fried bologna sandwich on white bread. Since then she has dined on horse Bourguignon in France, stir-fried eel in London, and mystery meat in her college cafeteria, but firmly draws the line at eating rattlesnake, peppermint and Hamburger Helper. She lives in Shasta County at her country estate, Butterscotch Acres West. She is nearly always hungry. Visit MenuPlease for more. 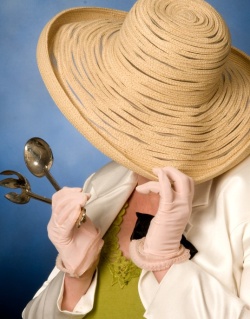 Femme de Joie's first culinary masterpiece was at age 4, when she made the perfect fried bologna sandwich on white bread. Since then she has dined on horse Bourguignon in France, stir-fried eel in London, and mystery meat in her college cafeteria, but firmly draws the line at eating rattlesnake, peppermint and Hamburger Helper. She lives in Shasta County at her country estate, Butterscotch Acres West. She is nearly always hungry. Visit MenuPlease for more or send her an email at femmedejoiefood@yahoo.com.

Comment Policy: We encourage lively debate. However, we ask that you please keep your comments respectful and civilized. Also, please share the space with others without monopolizing the comments platform, and stick to the topic at hand. The definition of terms is left solely up to us. Comments are disabled on articles older than 90 days. Thank you. I'm glad you're here. Carry on. Sincerely, Food for Thought/A News Cafe owner and publisher, Doni Chamberlain
5 Comments
Oldest
Newest Most Voted
Inline Feedbacks
View all comments
Post Views: 371

On the Job in Downtown Redding